Your Most Powerful Weapon:
Using Your Mind to Stay Safe

I like to study books that offer awareness tune ups along with training about how violence slips inside the guard of even watchful people. One of my favorite authors for this kind of reality check is Steve Tarani, who has trained personnel for the US Department of Defense, FBI, Homeland Security, low profile intelligence agencies, and other security organizations.

In Your Most Powerful Weapon Tarani explores why people so often fail to detect or even react to threats. Desensitized to violence by news about crime and terrorism, we still manage to convince ourselves that we’ll not be targeted. That disables our ability to react effectively. When people face danger, the phenomenon of normalcy bias creates disbelief he continues and, “you...greatly underestimate the severity and the most likely consequences. This, in turn, causes you to reinterpret the event, instead of taking evasive or decisive action.” 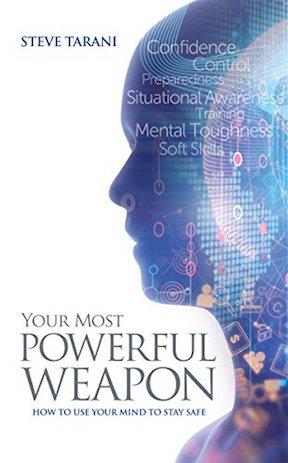 Another common reaction, Tarani writes, is “temporary mental paralysis” from an over load of “new, unfamiliar and threatening information.” Before you can react, you need to decide what to do, but that requires comprehension. How, without knowledge and understanding of what you are seeing, is that possible? John Leach, he quotes, suggests eight to ten seconds is a very good “processing time” to go from perception to action, but under stress that time increases considerably.

Tarani outlines cognition, perception, comprehension, decision, implementation and movement as the steps of recognizing and reacting to an emergency. He cites the findings of two Tokyo University researchers that people who survived disasters had done so by preparing for the worst-case scenario–“planning and running drills, responses and repetitions.” Practice, he notes later, is not only physical but can include visualization, too. “Running drills preloads information in your conscious and subconscious mind. It creates a familiarity, so the process is no longer complex and cumbersome, which frees your mind from paralysis and allows you to act,” he summarizes.

Tarani breaks self-defense skills into two categories: hard skills, which he designates as reactive–physical responses to attack–and soft skills, which, are proactive, and allow you to see danger coming. While he calls each necessary, he notes that soft skills should comprise 90% of self defense, while shooting and other physical defenses make up only 10%.

This Tarani parallels with a scale of human aggression. Low level is illustrated by a “scuffle” accompanied by verbal aggression; mid-level is the more serious bar fight or a fight at a sports event; at the highest level is the fight for your life that “minimally results in one or more combatants landing in intensive care with a very high probability of death or permanent bodily injury.” Along these scales are levels of injury ranging from very minor to broken bones to permanent injury to death. He adds that, “injuries are a tactical consideration,” since physical harm could leave you or those in your care defenseless.

He continues, “Although few people will ever encounter extreme physical violence in their lifetime, there are some truly bad people out there, who kill other human beings for a paycheck, street creds, or just for fun. These are the likes of war-hardened terrorists, religious extremists, hardened convicts, inner-city gangs and the criminally insane. We are merely tourists in their world.” Counter their willingness and experience with your own mindset, mental toughness, being a hard target and taking control, Tarani advises. He has trained government agents who are sent where they are exposed to all of the above hazards but cannot carry firearms. These attributes keep them alive, he writes, and goes on to discuss developing each of the four characteristics.

Each chapter in Your Most Powerful Weapon builds on the last. In the next chapter, Tarani introduces being a hard target by having readers acknowledge that we could have to defend ourselves at any time. This calls for the will to act added to a third facet–having “a plan proactively thought out that you will execute if a threat presents itself. Executing the plan grabs back control of the situation that threatened you.”

Tarani categorizes sensory input into “Event Indicators” and “Threat Indicators,” illustrating how we regularly use experience and intuition to predict what’s coming in daily life. Quoting Left of Bang, he advises readers to know the baseline of non-threatening situations in order to recognize threat indicators. He illustrates how crowds on the edge of an attack move, showing how a perceptive person can avoid getting caught up in a mass attack.

“The key to managing any active threat is not waiting to be caught in the middle of an attack, and then come up with a solution on the fly,” he urges. “It is, instead, to widen your scope of awareness prior to the attack, with the intent to predict or prevent your involvement.” While acknowledging the efficacy of guns in reaction to an attack, he stresses that, “Just because you carry a gun doesn’t mean it’s your first and only line of defense regardless of the situation. In fact, it should be your last.” If you have to go to guns, “you’ve been pushed back on your heels reacting to the situation,” he explains. Those taking proactive measures have the better chance to control the situation.

Violent crime follows a blueprint, Tarani writes. He outlines steps an attacker must complete, highlighting where to interrupt and where to take physical action when left no other options. He shows how much broader the range of choices is in the first 90% of the timeline when avoidance, evasion or interruption can prevent an attack from reaching the deadly, final 10%.

If it gets physical, he writes, “the greatest number of casualties usually occur in the first five minutes,” later adding, “In personal combat, time is a critical factor. The longer you wait to control the fight, the deeper you fall into the rabbit hole, as it becomes increasingly more difficult to take control.” He discusses exploiting the reactionary gap, using obstacles, explaining the relationship between injury and proximity, and moving to a more advantageous position. Movement and balance, a stable fighting platform and getting out of harm’s way are critical to survival, he details, going on to discuss improvised weapons, and running resource assessments as a regular habit.

Personal choices affect how much exposure to threat we accept, and while complete avoidance would seem to indicate complete safety, most will end up at some large public venues where large groups of spectators make an attractive target. Use positioning to increase safety, choosing seating near “readily accessible cover and/or exit points,” and be aware of cover you can quickly reach if a mass attack starts. Dress to accommodate unimpeded, carry a trauma treatment kit and know how to use it. Most of all, recognize your exposure, “set your baseline” of what is ordinary and what is a threat indicator, and adjust your personal radar to pick up on dangers, he advises.

Your Most Powerful Weapon includes a chapter on managing fear, addressing breathing, humor and preparatory steps to manage reactions to fright. Just as first responders are “conditioned, inoculated and accustomed” to the threats their jobs entail, training to expect the unexpected helps you control your interpretation and the emotions generated by an attack, he teaches. First responders learn to separate themselves from their emotions, he continues, describing training’s desensitizing effect. The values of cognitive rehearsal, and physical conditioning are noted, as well.

The book ends with a fast-moving synopsis, a few sentences summing up the topics explored in earlier chapters, and it provides a nice tune up for occasional review and reminders. I recommend Your Most Powerful Weapon.