What Every BODY is Saying

Joe Navarro, retired FBI nonverbal communication expert marvels that of all the social behaviors we are taught, “we’re never instructed on how to observe the nonverbal clues of others.” What Every BODY is Saying sets out to teach readers to recognize those many indicators and make accurate assessments. Navarro observes that for those who can decode nonverbal signals, that subtle knowledge reduces conflict through insights into the other’s thoughts, feelings and intentions. Using unspoken communication requires deliberate effort, he writes, and draws on “all your senses, not just your sense of sight.” 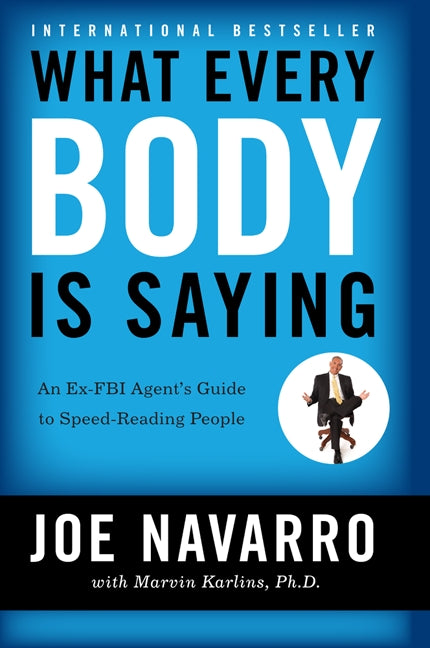 Navarro discusses the three-brain principle that defines “the human brain as a triune brain consisting of a ‘reptilian (stem) brain,’ ‘mammalian (limbic) brain,’ and ‘human (neocortex) brain.’” Adaptation from the primitive to the modern has not removed the primitive instincts, although they are revealed more subtly than freezing, running away or fighting. For example, the instinctual freeze is still seen in the utter stillness of one who is being reprimanded. That motionless posture may display an echo of the freeze, or feet and legs orienting toward an exit communicates how attractive escape is, he illustrates.

Navarro believes that the key to nonverbal communication is reactions instigated by the limbic system. “One of the best reasons for studying nonverbal behaviors is that they can sometimes warn you when a person intends to harm you physically, giving you time to avoid a potential conflict,” he writes, noting that when a person has a “limbic response” to negative or threatening stimuli, they will react with pacifying behaviors like rubbing the face, to name only one of many. “To be successful at reading nonverbal behavior, learning to recognize and decode human pacifiers is absolutely critical,” he urges.

“Understand that pacifying behaviors almost always are used to calm a person after a stressful event occurs,” he writes. “Thus, as a general principle, you can assume that if an individual is engaged in pacifying behavior, some stressful event or stimulus has preceded it and caused it to happen,” he writes. A person may deny it, but the body tells the truth. Perhaps the most truthful of all body language are the “intentional cues” given by foot and leg movement, Navarro continues. We’re taught early to smile and to keep our hands still to feign relaxation or confidence, but feet and legs are not as controllable. Navarro quotes body language great Desmond Morris, who observed, “the feet and legs are ‘the most honest.’” A foot pointing toward an exit, both hands on the knees and shifting weight under the feet, are common examples that indicate a desire to get up and leave. “When you note these cues, particularly when they come from your superiors, it’s time to end your interaction; be astute and don’t linger,” he quips.

Legs can also display territoriality or attempts to control a situation as demonstrated by splaying legs. “This sends out a very strong message to the careful observer that at a minimum there are issues afoot or that there is potential for real trouble. When two people face off in disagreement, you will never see their legs crossed so that they are off balance. The limbic brain simply will not allow this to take place,” Navarro teaches.

He writes, “Territorial leg splays signal the potential for tempers to flare; thus, whether you find yourself observing or using this type of nonverbal behavior, you should be on the alert for possible trouble,” adding, “predators (e.g., psychopaths, antisocials) often use this leg-splay behavior in conjunction with eye-gaze behavior to control others.” Chest puffing is another territorial display and can escalate to chest bumps. “If next, the person takes off a shirt or hat, expect a fight,” Navarro adds. Later in the book, he advises that if you’re uncertain whether a person is preparing to act, watch their nostrils. “As people prepare to act physically, they will oxygenate, which causes the nostrils to flare.” He even suggests teaching children to watch for “nasal wing dilation,” to avoid dangers at school or playgrounds.

Although, Navarro writes, much of literature about body language ignores the torso, the natural instinct to protect the vital organs in the torso results in many protective actions that occur unconsciously when we’re stressed, uneasy or fearful. Just like feet and legs, the upper body instinctively angles away from the unpleasant and if circumstances don’t allow actual withdrawal, a person may insert items as barriers – a briefcase clutched to the chest or items nervously rearranged on a desk or table – or arms crossed over the chest as a shield. More subtly, “fiddling with wristwatches, adjusting a tie knot” and other socially-allowable fidgeting allow arms to shield one’s torso.

Conversely, leaning closer or angling toward another is, “A very powerful way to let others know that you agree with them, or are consciously contemplating what they are saying...This tactic is especially effective when you are in a meeting and you don’t have the opportunity to speak up,” Navarro adds. Similarly, arm position communicates very effectively. “When approaching a stranger for the first time, try demonstrating warmth by leaving your arms relaxed, preferably with the ventral side exposed and perhaps even with the palms of your hands clearly visible. This is a very powerful way of sending the message, ‘Hello, I mean no harm’ to the other person’s limbic system. It is a great way of putting the other person at ease and facilitating any interaction that follows.”

It should come as no surprise that hands are highly expressive and so hand gestures “merit our attention as a rich source of nonverbal behavior to help us understand the thoughts and feelings of others.” Navarro discusses and illustrates use of hand non verbals when we need to be effective and persuasive. His suggestions?

So much of the pop science about body language purports to detect untruthfulness. Navarro discredits much of it. Contrary to popular belief, sweaty hands don’t indicate lying, he writes. It happens when the limbic system is activated, so probably does reveal discomfort and, depending on the circumstances, you may choose to demonstrate behavior to put the other person more at ease. Instead, people who are lying “tend to gesture less, touch less, and move their arms and legs less than honest people,” Navarro offers.

Hands may express high confidence signified by steepled fingers, and “Steepling of hands, fingertip to fingertip, is one of the most powerful displays of confidence we possess,” he explains. Conversely, fingers interlaced shows doubt, shaken confidence or “high distress,” and can devolve into anxiety-pacifying rubbing or hand-wringing. Even the position of the thumb while grasping a lapel or partly thrust in a pocket is indicative. “Thumb displays are so accurate that they can help you effectively assess who is feeling good about himself and who is struggling.”

Watch carefully for behaviors that are fleeting, “micro-gestures,” quickly suppressed, because “the more reflexive and short-lived the behavior is, the more truthful it tends to be,” Navarro writes. “One of the most important observations you can make in relation to the hands is noticing when they go dormant. When the hands stop illustrating and emphasizing, it is usually a clue to a change in brain activity (perhaps because of a lack of commitment) and is cause for heightened awareness and assessment.”

While decoding so many nonverbal communications (and we’ve only mentioned a few in this review), Navarro urges readers to consider context, look for clusters of behaviors and, in an echo of another great book, Left of Bang, whenever possible establish a baseline. For example, “You need to look for clusters of behaviors, constantly evaluate what you see in its context, and note whether the facial expression agrees with—or is in contrast to—signals from other parts of the body,” he writes. “Only by performing all of these observations can you confidently validate your assessment of a person’s emotions and intentions.”

What Every BODY is Saying is long and covers a lot of material, so I was really pleased to find a companion reference book by Navarro, The Dictionary of Body Language (HarperCollins 2018 ISBN 978-0062846877) that distilled the postures, gestures and expressions into one and two sentence explanations of 407 different behaviors that are discussed in much greater detail in the longer book. Together, they’re a great way to listen to more than words, evaluate more than expressions, and better understand and prevent conflict with others.