Guilt by Accusation: The Challenge of Proving Innocence in the Age of #MeToo

Staying home during the coronavirus problems should have made April a great month for reading, but for me, it was a month full of nearly double hours at work owing to a gubernatorial Stay Home order restricting my staff to their residences. Instead of tackling a new book, I took the opportunity to finish a couple of books I’d started months ago, and while I doubt these works are essential to Network members’ educational pursuits, each included different viewpoints that may create interest in subjects on which most already have strong opinions.

I’ll first touch briefly on a book about street kids, because while interesting, and presented from an experiential viewpoint, the social vision endorsed is so radically different than my own that it is hard for me to embrace the definition of the problem and suggested solutions. In Those Who Wander: America’s Lost Street Kids, Vivian Ho, an award winning journalist becomes deeply involved as she covers the issue of homeless youth. 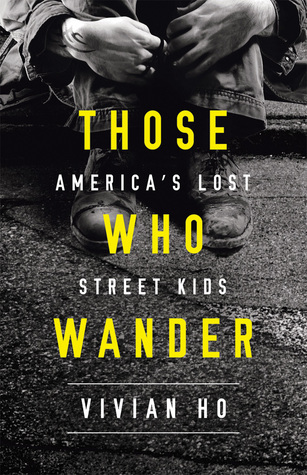 Ho concedes that “in the months I spent traveling around the country, talking to street kids, former street kids, housing advocates, trauma experts, social workers, and juvenile psychologists, I couldn’t come up with one singular clear-cut solution for helping this population and ending youth homelessness.

“Those who work with these kids will tell you it’s simple—homeless people need housing. But I’d ask, How do we keep kids from homelessness in the first place? How do we stop them from experiencing the sort of hurt that drives them into the streets, where they will only experience more hurt, and, in turn, hurt others?”

Street kids, she asserts, are humans who deserve compassion, not the systematic blind eye most practice. Ho does not acknowledge the genuine fear many feel when confronted with a stranger frenzied by drug intoxication or mental illness or when held up for money or valuables by an admittedly desperate youth.

While Ho sought causes in Those Who Wander, I read it seeking information that might help ordinary working men and women recognize when they’re being targeted for violent crimes, when mental instability or drug use makes murder seem like a logical solution to needing a car or other resources, to the youths her compassion embraces.

To Ho’s credit, she does not excuse the crimes of youthful murderers she interviewed and studied. Of one, she writes, “He knew what he was doing, and that is without question, because he had done it time and time before. He spoke of his misdeeds with an air of pride, laughing about crimes and acts of violence as if they were silly party anecdotes. He had trouble piecing together bits of his childhood and remembering the years and months that events took place, but when it came to his exploits, he could recount every detail down to the number of teeth he broke when he punched a man in the face...”

The journalist acknowledges that she interviewed street kids who had killed with a subconscious wish to hear them express remorse, but that wish went unfulfilled. Instead, one youth explains that he has “been abused by humans my whole life” and as he spoke of killing as if someone else did it, he expressed no empathy for the dead or those mourning them. Indeed, Ho concluded, “remorse, the ability to feel guilt, to take responsibility for your misdeeds” is seen by this population as suicide, a death wish, an impediment in the fight for survival. Those Who Wander’s conclusions, hiding beneath a veneer of social concern, are chilling.

The other book I finally finished reading this month is a biography about being falsely accused. In Guilt by Accusation: The Challenge of Proving Innocence in the Age of #MeToo, prominent law professor and attorney Alan Dershowitz tells how he defended himself against media accusations and federal lawsuit alleging that he sexually abused an underaged woman who was trafficked by Jeffrey Epstein. 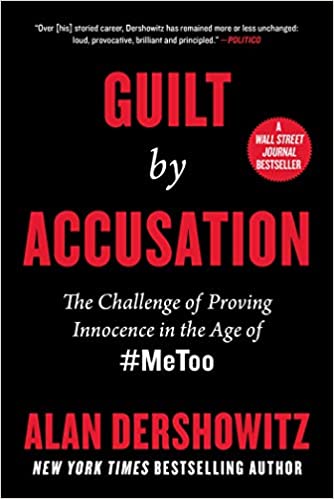 Epstein’s sordid fall entailed more than enough nastiness to slosh over on to all his acquaintances, including the subject of this book, his attorney Alan Dershowitz who was among a list of prominent men Virginia Roberts Guiffre accused of rape and abuse. The claims about Dershowitz were publicized late in 2014, when he was accused of “having sex on seven occasions with an underage female.” A federal judge “struck the accusation from the record as irrelevant and impertinent,” but the media campaign raged on eagerly fueled by the complainant and her attorneys who envisioned collecting large sums of money from anyone even remotely associated with Epstein.

The details are not the reason I read Guilt by Association; I read it, eventually finishing even the end notes, because I was drawn in by Dershowitz’s willingness to embrace very non-traditional defense strategies because he knew without a shadow of a doubt that he was defending an innocent person.

“When I take a criminal case, I begin with a presumption of guilt: I assume my client probably did it, though I hope I’m wrong—and sometimes I am.” Dershowitz relates. When defending himself, he adds, “I did everything I would never allow any of my own clients to do—because most of my clients have had something to hide.”

If there was video of the client being on a different continent to irreproachably prove that they could not do the crime of which they are accused, Dershowitz continues, then “I might well waive his rights and encourage the police to question and search him. I might encourage him to go on TV, assert his innocence, tell his story...After all, if the client is innocent, what does he have to hide? Why have the client look guilty by refusing to answer questions? Well, I was that client. Having nothing to hide, I did what I would never allow a client, of whose innocence I was not absolutely certain, to do. I went on TV, asserted my innocence, provided my evidence, waived the criminal statute of limitations and answered all questions.” In a later chapter he discusses his meeting with Federal prosecutors and investigators and his demand that law enforcement investigate him.

Dershowitz details how rules governing defamation allow lawyers to introduce false accusations in court documents. These are viewed by media consumers as more credible because “it has the imprimatur of the courts.” He discusses pros and cons of various responses: disputing the information immediately in the media, to respond via court proceedings, or ignoring the lies in hopes that the accusations go away. He opines, “The third option is to ignore or ‘no comment’ the accusation and hope it goes away. An entirely innocent, falsely accused victim should not be satisfied with the story going away. He should categorically deny and disprove the false accusation.”

Dershowitz compares the accusations against him as “Kafkaesque” commenting that Kafka wrote fiction, but “What I have described is real. It is happening to me right now. And if it can happen to me, it can happen to anyone.” He later adds, “Imagine the same thing happening to a person who did not have the resources to fight back.”

Although the issues in Guilt by Accusation were lies put forward to extort money, I could not help but think of the self-defense court case of the decade, when the State of Florida and the Martin family attacked George Zimmerman’s right to defend himself against Trayvon Martin’s “ground and pound” assault. Martin’s parents settled with the Resort at Twin Lakes homeowners' association insurance company for an undisclosed payment.

Dershowitz’s views and manner are polarizing and he admits in his book’s early pages that people dislike his politics and his outspoken opinions. Guiffre’s lawsuit, he opinions, had three purposes against him as a high-profile but unpopular public figure: “First, to defame me and lie about me in the pleadings, on the assumption that these pleadings are protected from defamation lawsuits; second, to punish me economically by requiring me to spend money on legal fees and heightened insurance premiums and to take time from the other work I am doing; third, to try to get me to settle, in the way that Epstein settled his cases, giving the plaintiffs and their lawyers a windfall.”

The parallels between Dershowitz’ legal problems and prosecutions against one legitimately using force in self defense are hard to miss–gun owners are not popular in America today; the legal system is a very powerful force that convinces many defendants to plead guilty; unpopular people are punished by loss of income and damaged reputations and the media and courts are the tool through which it is accomplished. While much of Dershowitz’s book focuses on holding reporters and media responsible for spreading known false accusations, I had to wonder if he saw that his ordeal has long been mirrored in the aftermath of armed self defense.

Dershowitz predicts, “If this state of evidence is allowed to become the new basis for determining guilt, then we will surely have moved to an age of guilt by accusation, rather than by proof. The important lesson for all Americans is that if this can happen to me—if I can be falsely accused and have my reputation tarnished by a frame-up plot with no evidentiary support—it could happen to anyone: to you, to your son, to your father, and even to your daughter. I have the resources and the determination to fight back and to clear my name, though it has cost me a small fortune.” His call for change notes, “This is everyone’s battle, not just mine. It is a battle for justice for all. It is a struggle against those who bear false witness.”

Because it is self-reported, it is difficult to assess the veracity of all of Guilt by Association’s assertions. Dershowitz’s responses to the false charges are so very similar to wishes expressed by defendants who, surprised to be charged with assault, manslaughter or murder after self defense, beg their legal teams to throw out the traditional legal playbook and risk all the things an innocent person wants to do to explain why they did what they believed necessary to avoid being killed or crippled. Held up against that comparison, Dershowitz’s book, Guilt by Association, is a fascinating view into the American legal system and the art of defending the innocent against false accusations and malicious prosecution.