I got a call yesterday from a reporter for the Wall Street Journal. He wanted to discuss with me the Open Letter to the NRA Board of Directors I wrote for the July 2017 eJournal. I don’t normally give interviews to news media, especially East Coast liberal media, but I have not seen a lot of slanted sensationalized reporting on the gun issue from the Wall Street Journal in the past, so figured I would go along.

It turns out my caller was reporting on NRA Carry Guard and what he perceived as a failure of the NRA to successfully launch the program. He was primarily interested in the training aspect of Carry Guard and why currently they are not offering any classes, at least none are offered on the website.

I didn’t have any “secret Sam” information for him, and since I don’t know how the program is really doing, I could not discuss it in-depth with him. I did discuss what the reasons could be if it is failing as he surmises. We also chatted about the insurance angle for a little while, but nothing major there, either. Since I don’t subscribe to the Wall Street Journal and seldom read it, I would ask that if any of our members who do subscribe could let me know if an article comes out in which I am quoted, please let me know, okay?

There are a couple unique training opportunities coming up soon in my area, in the Pacific Northwest. Up first is a Rangemaster Tactical Conference, featuring many of the nation’s top firearms instructors. For a very reasonable $389, folks can come train with the likes of Tom Givens, William Aprill, Col. Ed Monk, Massad Ayoob and many others.

Complete information about Tac-Con, scheduled July 27-29, 2018 can be seen at this link.

The Monday following Tac-Con I have engaged Col. Monk to teach a repeat session of his Active Shooter course in Chehalis, WA. I asked him to stay and teach for an extra day and I rented the Veterans Memorial Museum in Chehalis, WA, to hold a large training seminar. The cost is only $35, and is a “must attend” class for anyone who is concerned about figuring how to combat the rising incidents of active shooters. Here is my website’s link for more info.

Stop by the Network Booth and Get a Free ACLDN Pin!

As you know, we don’t do a lot of promotion. We like to think that savvy gun owners who want the best legal protection at a very affordable price will do their research and find the Network. Perhaps that is naïve and old school, but it is our way and we like it! 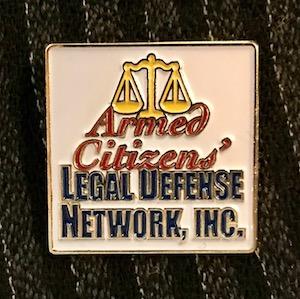 Having said that, we recently commissioned a run of lapel pins, to give to members we meet along the way, and include in our package to new members. If you see me wandering the aisles at the NRA Annual Meeting in a few days, stop me and I will give you a pin, or if you can get to our booth #7855, we will have them there for members in good standing.

Also in our booth at the NRA Annual Meeting, we will have an informal meet and greet with several of our advisory board members available to chat with members at 4:00 p.m. on Saturday. In addition, Massad Ayoob will be in our booth signing autographed photos for our members on Sunday at noon.

We really look forward to the annual meeting, because it puts us in touch with our members, and that is a good thing.

Last month I responded to a member who thought I was wrong to have mentioned keeping President Trump in office, for no other reason than to keep the US Supreme Court leaning to the conservative side, at least when it came to interpreting the Second Amendment. The member didn’t want to see me politicizing the Network eJournal, and I frankly agree with him. Partisan politics do not belong in the eJournal, and I expect to follow that line of thinking. Interestingly though, we received several comments from members saying they felt I was wrong in taking this course of action. Here are a few of those comments. I’m sorry that we do not have room to print them all.
___

Just read your Mea Culpa in the April newsletter. It was totally unnecessary.

Since politics is the major driving force that is restricting our Second Amendment rights, it was totally acceptable for you to highlight the need for keeping President Trump in office (with a Republican House and Senate) to appoint and confirm conservative, gun-friendly judges.

While I agree that we do not want to turn the newsletter into a political blog, it would be foolish to put our heads in the sand, as the leftists take away our rights one by one and not educate our members about how to save our rights.

The first article in the April newsletter–which discusses Penny Dean’s efforts for a member, puts the legal system against the victim while ignoring the criminal–is a great example of why politics is a primary concern to members of the Network.

Thanks to you and Gila, the Network is a force for protection of gun owners who have used guns or pepper spray to defend themselves from harm.
___

My wife and I strongly disagree that Marty needed to apologize for his comments about needing conservative judges appointed. The need for conservative judges, including SCOTUS, is mandatory to saving the Second Amendment. President Trump was certainly not our first choice, but consider what would be happening if Clinton had won that election. In my mind, that is a major reason for the ACLDN. It’s hard to believe the members that are Democrats and other liberals would disagree. I am ACLDN member #7254.
___

Hi, Marty. I just read your mea culpa concerning a fellow Network member’s complaint about you expressing certain political views in last month’s ACLDN eJournal. IMHO, no apology was or is necessary. In the current political climate, gun control advocates seek typically either to ban firearms altogether or place unconstitutional restrictions on their use and/or possession. Therefore, it IS necessary that President Trump stick around long enough to appoint Supreme Court Justices who support the Second Amendment and who will uphold the holdings in Heller and McDonald.

Contrary to the assertion of the complaining Network member, you were quite correct in espousing views in accord with that philosophy, particularly in a publication that serves a pro-Second Amendment demographic. Apologizing for expressing your viewpoint serves only to minimize the importance of upholding constitutional protections for many, in favor of assuaging the objections of a very few.
___

Marty, your “Mea Culpa” is quite admirable, and demonstrates lofty goals, indeed. However, considering the times we live in, it is not necessary and not appropriate. If this were the year 1950 rather than 2018, your “Mea Culpa” would be admirable, indeed. Unfortunately, it is the year 2018, and the leftist totalitarian onslaught is 80% complete. The “other view” is already cast in stone in virtually all of our media, our academia, our “press” and our “entertainment industry.”

We at ACLDN are amongst the precious few who still dare to voice an alternate view. Do not apologize. Please do not campaign for specific candidates or engage in pointed hyperbole, but please DO state our common beliefs and values. That is why I am a proud member of the ACLDN!

Get Ready for a Rough Ride

With the above comments in mind, I have a troubled heart. That is because while we Second Amendment advocates and gun owners for the most part simply want
to be left alone so we can prosper and build great lives for ourselves and our nation, the anti-gun left will not allow that.

Case in point: In Washington during our last legislative session, a bill was introduced that would change how gun dealers handle the sale of semi-automatic rifles. The purchaser must be age 21, complete a background check and obtain a license to own an assault rifle, if they want one.

Thankfully, the bill never made it out of committee, but our fears have come true. Now, an initiative has been filed here in Washington State that, if passed, would require the above to become law. WA has recent precedent for passing this type of initiative. Two years ago, Initiative 594 passed which required a background check prior to all sales of guns here in WA State.

I fear this new initiative will pass if it gets on the ballot. It will not ruin our lives, and in fact, it might enhance mine because I run a shooting school, which would likely do a lot of the training for the “assault rifle owner’s permit.” But, I would rather not make my living on mandated training and so I will do what I can to defeat the initiative if it gets on the ballot.

This discussion addresses only Washington State. I know that similar efforts by the anti-gun left are being mounted all across our country. I believe the best thing one can do is to support your gun rights organizations with donations, and support pro-gun candidates for local and national office. What else can we do except keep fighting?

I sign off this month with a heavy heart, but still look forward to seeing as many members as I can at the NRA Annual Meeting. After that weekend, I will have another report from the Board of Directors meeting next month in the eJournal.