The Gift of Fear

I have tried several times over the years to accomplish a complete reading of the much-celebrated book, The Gift of Fear by Gavin de Becker, but De Becker’s reliance on hyperbole and on broad statements to elicit reader buy-in to assertions based on his personal beliefs stopped me every time. This time, however, I determined to put aside my complaints and push through to the end of the book. So much praise has been heaped on The Gift of Fear that I determined to read every page. After all, de Becker is the source of the axiom, “No is a complete sentence” and this book is often lauded by personal safety instructors.

There is another reason to read The Gift of Fear. As an unusually self-sufficient demographic, we sometimes fail to understand people who are victimized. For example, citing statements by crime victims, de Becker explains how often women are subjected to unwanted attention, being “checked out” for unknown purposes, suggesting that, “At core, men are afraid women will laugh at them, while at core, women are afraid men will kill them.” Most men cannot recall an incident within years in which they felt their safety was threatened, but this is not true for women, he explains. 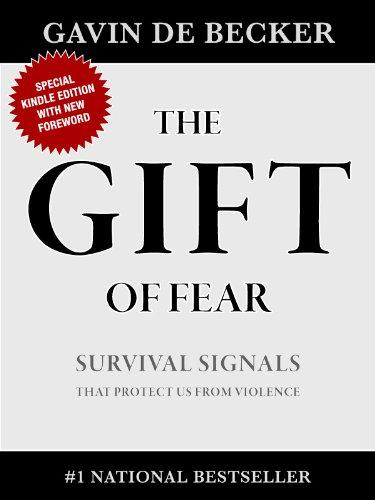 De Becker teaches how elemental aggression and violence is to the human condition. It is wrong to call violence unpredictable, he writes. “The human violence we abhor and fear the most, that which we call ‘random’ and ‘senseless,’ is neither. It always has purpose and meaning, to the perpetrator, at least.” Considering victimization out of our control is one way of denying that we have the power to avoid or fight off danger.

De Becker delves into false beliefs embraced to deny vulnerability, explaining that, “Even the simplest street crime is preceded by a victim selection process that follows some protocol. More complicated crimes...require that a series of specific conditions be met…that involve making oneself available to a criminal, such as accessibility, setting, and circumstance.” We also control our responses to the criminal interview and can decline to engage in unwanted conversation, refuse to be manipulated by a suggestions of entitlement and most of all, react when intuition warns of danger. He asserts that intuition provides many more warnings than we act on, commenting that of all creation, humans are most notable for ignoring that he calls “survival signals.”

Aside from outright denial of intuitive signals, intuition may be thrown off by inaccurate information. Since we edit information we take in and invest with credibility, evaluating sources of information is important. In addition, we “edit out” what does not seem important, although de Becker asserts that we are continuously taking in these details so, “When something does call out to us, we ought to pay attention,” he writes.

Intuition operates on several levels, de Becker explains later in the book, with fear deserving the most attention, then, in declining order, apprehension, suspicion, hesitation, doubt, gut feelings, hunches and curiosity, as well as “nagging feelings, persistent thoughts, physical sensations, wonder, and anxiety,” which, while less urgent, can send warning signals to an open mind.

After describing how denial and self-doubt create victims for savvy predators, de Becker outlines characteristics common to violent offenders. He adds that a skilled criminal employs many masks to hide intent, so he details strategies played out to control victims, including–

Sometimes numerous survival signals come in a quick burst and action to preserve life and safety is immediately required. De Becker provides good instruction on fast, accurate decision-making. “Prediction moves from a science to an art when you realize that pre-incident indicators are actually part of the incident,” he explains, proposing that when making a high-risk prediction, the following eleven elements increase accuracy:

Similar assessment strategies are described for evaluating verbal or written threats. De Becker explains that life brings many disturbing and deeply troubling situations that do not pose physical danger. “We all know there are plenty of reasons to fear people from time to time. The question is, what are those times?” In my opinion, the main reason to read and reread The Gift of Fear is making that distinction. No one wants to be in the news for shooting a teenager who came to the door for a benign reason.

I am not certain I agree when de Becker decries “walking around in a constant state of vigilance,” noting that constant fear is unnecessary and harmful, but that may stem from differing definitions of vigilance. He strives to relieve baseless fear by asking readers to differentiate between what they actually fear and the person that arouses that fear (a person walking down a dark street, or an unknown man entering an elevator car occupied by a lone woman, for example). “Our fear of people, which can be a blessing, is often misplaced,” he writes.

In the last one-tenth of The Gift of Fear, de Becker gives free rein to his anti-gun beliefs, at one point writing, “Most frightening of all, we live among armed and often angry countrymen.” He suggests that having guns to counter danger is illogical, explaining that concealed carry licensees could do more good carrying medical supplies and writing that an armed couple he interviewed, “Are far more likely to shoot each other than to shoot some criminal,” adding, “But his anxiety wasn’t caused by fear of death—if it were, he would shed the excess forty pounds likely to bring on a heart attack. His anxiety is caused by fear of people, and by the belief that he cannot predict violence.”

Additional chapters discuss interrupting patterns common to harassment, persistent threats that build up to workplace violence, domestic violence, stalking, parenting a violent child, common identifying factors amongst those who assassinate famous people and a wrap up about worry and anxiety.

When de Becker discusses the science behind how intuition works and keeping it sharp, The Gift of Fear is at its best. When he drifts into his political views, he squanders his book’s value. Unlike many in our circles, I just cannot recommend de Becker’s work in its entirely. In my opinion, it seems to fail to acknowledge the basic human right to self defense. By removing a tool of self defense–the firearm–from the personal survival options I believe he does a tremendous disservice to his many trusting readers.