Several months ago, Ed Lovette, author of Defensive Living and Snubby Revolver, recommended a new book written by an associate with whom he worked while in government employ. I respect Ed enormously, so bookmarked it for reading when I had an open weekend. Since detecting imminent attack and sidestepping it altogether is so preferable to fighting, I wanted to learn danger detection from Ed’s former colleague, much as I had been privileged to learn from Ed several decades ago in an all-too-brief class that left the student wishing for more.

By way of introduction, Bradford comments that personal security instructors tend to teach what they are best at–shooting or hand to hand defenses. Citing crime statistics, he notes, “We believe it is more useful to determine what the threat is likely to be and what skills are necessary to elude that threat.” He adds later, “High speed driving, martial arts, and marksmanship are useful skills–but only after you are aware that there is a threat.” 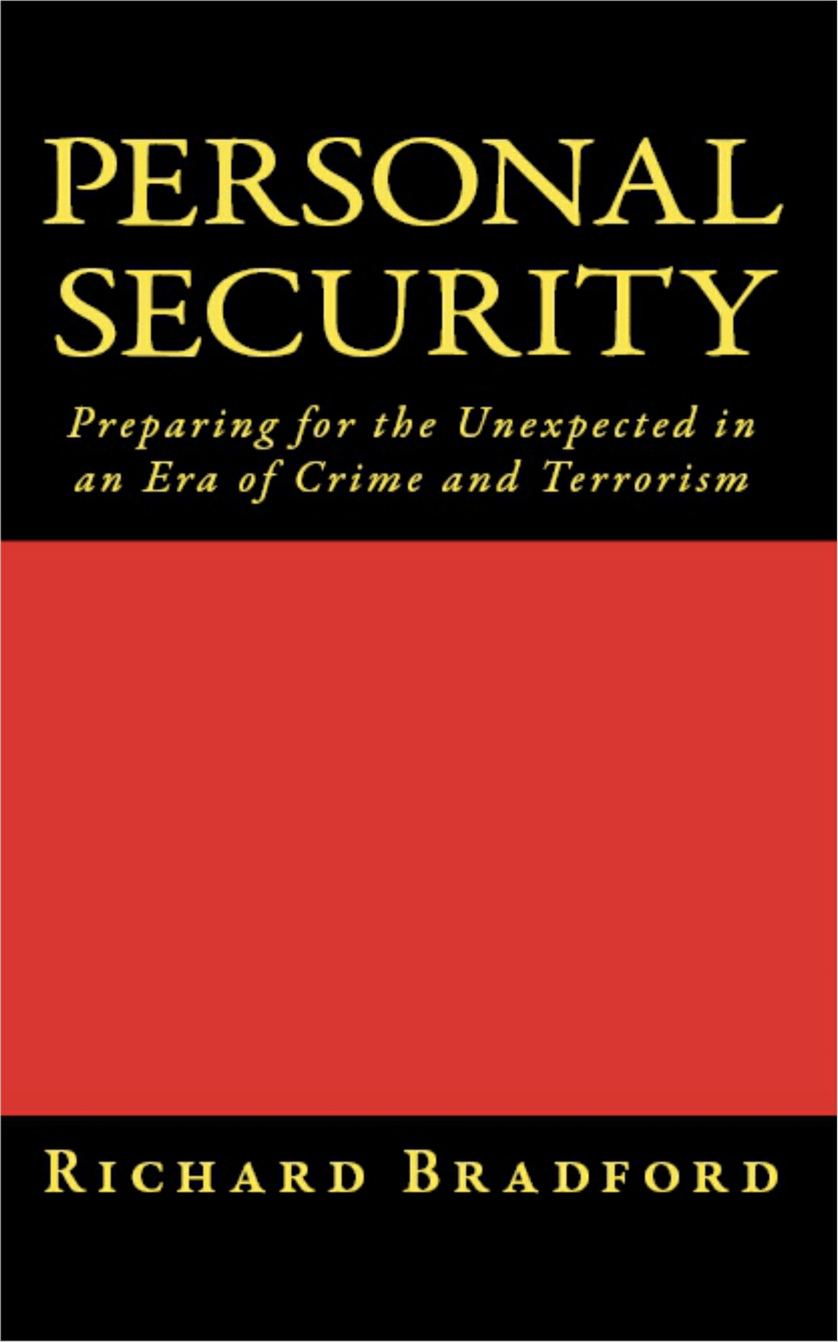 Bradford draws lessons from statistics that divide human reaction to danger into 10-15% of people responding “calmly and reasonably” due to prior experience and training, another 10-15% panicking or over-reacting and 70-75% under-reacting or freezing, he cites. He notes that any reaction to attack, even if in hindsight it is judged as a wrong response, raises survival odds to 90% or higher. An attack will be chaotic, Bradford warns, and habituated responses, “unthinking and automatic,” are most accessible under stressful conditions. Habits, he adds, result from reminders, routine, reward and repetition and he offers several useful suggestions on how to build the habit of awareness through innocuous cues.

Responses to danger must be intuitive, Bradford continues, adding that intuition draws on experience to recognize patterns that suggest what is about to happen. Intuitive reactions require “a small fraction of the time it would take to consciously analyze a situation,” he explains. The analysis should occur in advance, he details, including considering your situation from an attacker’s perspective, focusing on the most likely scenarios, visualizing, keeping options open, and he offers a number of other principles, including relying on gross motor skills, not declaring a situation safe too soon, and more.

Bradford teaches that it is best to expect attack and determine in advance to counter it. The unsuspecting victim misses warning signs, he adds, then the surprised victim needs too much time to make sense of what he or she sees, formulate a response, then execute the response. “The safer the feeling, the more complacent the attitude, the more shocking and debilitating the effect of sudden surprise,” he accounts. Later, correlating Cooper’s color codes to physiological response as indicated by heart rate, he concludes, “Going from condition white through yellow to orange to red will prepare you for the fight (or flight) of your life. Going directly from condition white to black can leave you a quivering mass of useless flesh.”

Students of personal security may weary of being advised to practice awareness, and he suggests that the difficulty is caused by not being taught of what we should be aware. “Looking is not enough. You must be looking for something. You must have a strategy to determine what you are looking for and a way to turn ‘seeing’ into true awareness,” he stresses. In addition, knowing what is irrelevant allows the mind to deliberately focus on important details like knowing the location of entrances and exits or cover and concealment, to cite examples Bradford gives later in the book.

Numerous studies teach threat indicators but first one must have been sufficiently observant to know what is normal, and then alert to cues to the abnormal, Bradford suggests. And finally, working to become more observant alone is “meaningless if you do not also
improve the action or reaction that you take in response to your observations. Without preparation you are likely to do little or nothing when faced with a life-threatening attack,” he warns.

Bradford’s section on how attackers prepare is drawn from protection principles for high-profile targets, and many of the steps are the same for detecting resource predators. Early recognition is critical and while an attack may seem random, there are periods in our daily routines that are more exposed than others, and these we can control. “By analyzing your own routine, it is possible to predict with some degree of accuracy where and when you are most vulnerable to attack. Knowing this, you can determine how you should plan to avoid, or to evade, or where to go after countering such an attack,” he advises. Using the daily commute to and from work, he teaches recognizing safe havens and danger areas. By studying the terrain we pass through daily, we are better able to recognize when a threat has moved into what was previously a safe area, he advises.

Confirmation bias can interfere with observational skills, Bradford writes, explaining that humans try to rationalize what is unfamiliar or uncomfortable. Victims facing violence may report they “thought a movie was being made,” so did not respond, in other cases, distractions blind the observer to vital details, and Bradford cites studies debunking the concept of multi tasking to explain that we really can’t concentrate on two things at one time–we merely switch rapidly from focusing on one thing to another, often missing vital details in our distraction. “Surprise is the criminal and terrorist’s most powerful weapon; it is the victim’s greatest vulnerability,” he stresses.

In just a few pages, Bradford packs a whole laundry list of factors for which the observant person looks. Instead of telling the reader to regularly scan their environment, he recommends patterns and terrain features, stressing, “Do not just move your eyes from side to side. Actually think about what you are seeing.” Distractions may tunnel your vision, he warns, then advises ways to escape in the greatest safety, engage help from others, choose the safest positioning in a room, escape far enough to reach safety, and work through difficult situations like lengthy airplane flights, where it is not possible to remain continuously in condition yellow.

Bradford gives a good briefing on driving, noting that familiarization with locks, door releases, seat belts and other features is critical to not being trapped inside a car, but really, the car’s strongest contribution is helping you escape an area quickly. His driving technique review is very good, and although as he humorously notes, most Americans believe they are better drivers than they really are, there’s always room to improve. In this useful section, he addresses vehicle performance, staying within the road and your car’s limits, understanding how to back out of trouble, and other driving skills beyond what one normally uses.

Personal Security is a short book, and one reason is the absence of the long and detailed stories about attacks so frequently found mixed into self-defense instruction. Bradford believes that citing case studies distracts from “principles that can be applied to the greatest number of probable incidents.” He opines that it would be nice to “provide a list of tactics and techniques that could be applied to a wide variety of possible threats,” but that would do a disservice to the reader, he believes, because “a tactic applicable in one environment may be disastrous in another.” He instead proposes to teach the reader principles that are more generally applicable, and having completed the book, I suggest that he succeeded.

Bradford closes Personal Security with advice to refer back to his book from time to time. Practice the skills outlined he advises–especially the observational techniques taught–until awareness is second nature. The best outcome, he encourages, is spotting danger before it becomes life threatening.