I received a message from a member a couple days after my June President’s Message, in which I discussed recent developments at the National Rifle Association.

"I am disappointed Marty continues to vilify the NRA due to monetary reasoning. Further, to not support membership takes a narrow view. If some resources are redirected within for carry insurance, then so be it. Keeping in mind OUR GUN RIGHTS OF TODAY WOULD BE MINISCULE WERE IT NOT FOR THE NRA, while other gun rights organizations, by comparison, whose contribution are laughable; SAF spends more attacking NRA than fighting foes. ACLDN will triumph. To continue to criticize is a narrow view indeed." 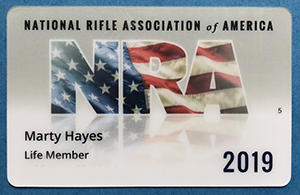 In response, I would like to take this time to set the record straight about my feelings towards the NRA. I believe every gun-owning American should be a member of the National Rifle Association.

Here’s why: The reason the NRA is such a powerful organization is because of the number of voters its members represent. The NRA’s greatest asset is its ability to call the attention of its five million members to firearms-related political issues and to affect political outcomes at election time through the recommendations about whom to vote for the organization provides. Thus, to refuse to renew your membership in the NRA is to cut your nose off to spite your face. A smaller, weaker NRA does our cause no favors.

If revelations about the inner workings of the executive board and the upper management of the NRA has, for the present time, made you decided not to donate any additional money to them until they clean up their act, I understand. In fact, that is the course of action I have taken. Instead of monetary donations to the NRA, look to your local grass roots gun rights group and donate there, or pick another of the good national organizations and give them some help. When the NRA calls for donations, tell them politely “no more money” until the NRA cleans up its act. Ultimately, that’s what will cause the NRA to get its act together.

I will not hesitate to discuss the NRA as it affects the Network. We plan on being able to meet our current members and enroll new members at the NRA Annual Meeting in Nashville next year. Until then, unless something major at the NRA affects the Network directly, I will let this topic go. There is plenty of information about the NRA coming from more informed sources with a broader reach to the masses than I have.

All over the country, firearms classes are full or nearly so, and thousands of people each weekend make the trek to their local, regional or national training school to partake in a professional training course. As you know, the Network offices are located at The Firearms Academy of Seattle range. In addition to my daily activities at the Network, I keep an eye peeled for any issues that are occurring on the range. Fortunately, I have assembled a staff of administrators and trainers that pretty much handle all the day-to-day range activities, from enrolling folks in classes to teaching on the range. Having this in place allows me to concentrate on Network business. I do still get out on the range occasionally, either for teaching duties or as a student.

You would think that after 35 years as a law enforcement instructor, competitor and civilian sector trainer, I would not feel compelled to do that much shooting and training, but that’s not the case. Those long years in the firearms business give me perspective, both about the industry and regarding my own shooting skills. As I age, I find my skills trying to degrade. I continue to train to slow down this downhill slide, because I want to stay as skilled as possible for as long as possible. Why?

We face increasingly complex threats every day, threats that require the very best you can muster just to survive. As I write this, the recent murder of Sacramento Police Officer Tara O’Sullivan is foremost in my mind. She was killed while serving an arrest warrant when her killer shot her with a semi-automatic rifle. While she was lying in the backyard of the house where the incident took place, the killer continued to engage officers with the advanced weaponry he possessed.

O’Sullivan’s killer is the type of criminal that not only law enforcement faces on a daily basis, but the normal armed citizen faces, too. I want to be as skilled as possible, so I train. This year, I will take what has become my yearly trip to Gunsite Academy for training. I also compete in IDPA matches regularly, and, of course, I still teach occasionally at The Firearms Academy of Seattle. In my mind, it is simply not sufficient to have a mediocre level of training.

Sure, most incidents involving the average armed citizen can be solved with an average level of skill, but what about that anomaly? I don’t play by the averages, a mindset which pushed me to form the Network. The chances are overwhelming that you will not end up having to use a gun in self defense. If you do, there is still a good chance that you will not be prosecuted or sued. I don’t think that means I need not have a back-up plan in case I’m the anomaly. We carry guns and we are members of the Network because we recognize that it is the anomaly that is the problem, not the average.

With the need to train in mind, The Firearms Academy of Seattle is hosting Massad Ayoob and there are still some openings in his excellent course MAG-40 (see https://firearmsacademy.com/guest-instructors/mag-40-armed-citizens-rules-of-engagement-livefire-course-07-18-2019). Perhaps we will see you there in a few weeks. If not, check https://massadayoobgroup.com/events/ to see if a class is offered near you.