Five Minutes that Changed the Bureau

In the decades since the FBI’s April 11, 1986 shoot out with two heavily armed robbers in Miami, FL, many have forgotten the deaths of that day and the heroism of FBI Agent Edmundo Mireles. These lessons should not be lost. At the 2018 NRA Annual Meeting, friends mentioned reading advance copies of a book on the shootout by Mireles himself. A Google search turned up the retired agent’s book, modestly self-published, and I ordered it immediately. 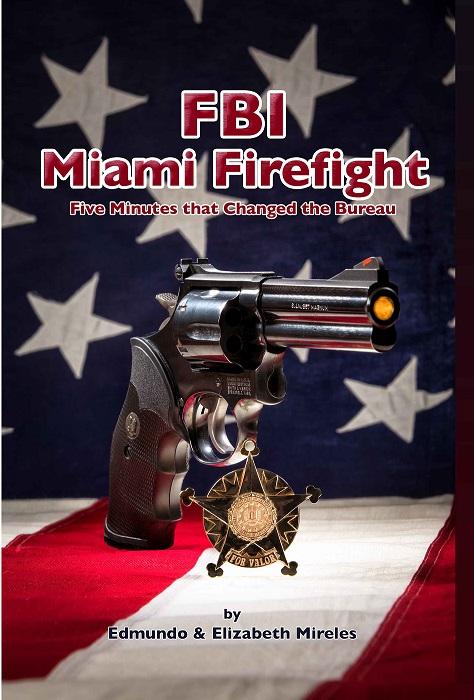 FBI Miami Firefight: Five Minutes that Changed the Bureau is an autobiography unlike the many outside analyses published about this incident over the years. What, I wondered, would be the perceptions of the agent who, despite a head wound and a disabling gunshot injury to his left arm, continued to shoot until the robbers, Platt and Matix, were themselves dead. And what drove the man who continued to fight to save his fellow agents long after he was seriously wounded?

After serving as a U.S. Marine, Ed Mireles joined the FBI, transferring to the Miami field office in 1985. His description of the team he joined gives faces to what has previously been only names cited in analyses of the fight. Mireles recalls, “The squad had some of the most talented and experienced agents in the office. It was the hardest working, most ruthless group of guys you can pack into a room…I would come to respect, fear, and love those guys like brothers.” Readers “meet” the agents who died in the shootout Jerry Dove and Ben Grogan, as well as those who survived, Gordon McNeill, John “Jake” Hanlon, Richard Manauzzi, Gilbert Orrantia, Ron Risner, and others.

A series of armored car robberies kept the agents busy from October of 1985 through the spring of 1986. Mireles details the increasingly brutal robberies and the FBI’s investigation, including the description an attempted murder victim gave of two men who took his car and left him for dead. This identified the car Platt and Matix drove April 11th, and Mireles explains other details that guided the investigation, as well.

On Friday, April 11th fourteen agents dispersed in eleven vehicles, surveilling banks along a five-mile corridor of South Dixie Highway. They dressed casually, but carried in their vehicles heavier armor, long-barreled guns, raid jackets, back up guns and other equipment.

Mireles and Jake Hanlon, his partner that morning, got coffee then parked where they had a good view. Mireles planned to put on his raid jacket and load his shotgun after drinking his coffee, he relates. At 9:30 a.m., Platt and Matix, drove their stolen car past a bank, catching the eye of agents Jerry Dove and Ben Grogan who followed it but waited to see the license plate before radioing their teammates. As soon as they did, the other agents sped toward their location. With his partner driving, Mireles loaded his shotgun while helping navigate.

Mireles writes, “The ‘fight or flight’ response was kicking in. My mind was racing. Time seemed to have slowed down.” He describes mentally rehearsing what to do, commenting, “There were so many possible scenarios with so many possible outcomes that it was almost impossible to formulate a plan. This entire process took about a second,” but seemed much longer. He made a plan to use his shotgun from cover but acknowledged that the bad guys could “veto” his strategy.

Mireles tells how the agents followed the robbers’ car onto a side road and boxed it in while the lead agent delayed until marked law enforcement vehicles arrived. Agents saw into the car where the occupants were loading guns, but radio problems kept the warning from going out. These details rarely make it into incident analyses and in telling the story, Mireles fills in much of the “why” behind the tragedy.

As Mireles’ partner drove along the stolen car’s left side, Mireles came face to face with Matix, driving the other car. Experiencing time, distance and auditory distortion, Mireles tried to wrestle the shotgun up to shoot him but there was not time. He recounts, “Manauzzi [in the car behind] saw the passenger, Platt, raising a long-barreled weapon and aiming it in the direction of Jake and me. I never saw this because I was so focused on the driver.” Manauzzi rammed the suspects who veered left while the car Mireles was in swerved right and crashed. Across the street, agents trapped the criminals’ car.

Bailing out of their car, Mireles and Hanlon approached at a run. Grogan, Dove and McNeill were behind their cars shooting and Mireles ran toward McNeill to reach cover close enough for the shotgun to be effective. Armed with a rifle, Platt shot Manauzzi, Mireles and then McNeill, who continued firing and hit Matix in the head and neck, disorienting but not disabling him. Also shot, Mireles fell but began to regain consciousness. His left arm was ruined; his right still gripped his shotgun. Arterial blood spurted from his left temple.

Agent Jerry Dove shot Platt as he climbed out the window of his blocked door. The shot severed his brachial artery and collapsed his lung but Platt still fought. “The ferocity and determination with which Platt and Matix continued to fight would be a wakeup call for all law enforcement,” Mireles writes, revealing what they learned about the killers’ background and training.

Mireles lay on the ground as shock set in as darkness began to close at the edges of his vision. He had to act and so he pulled himself along the ground toward the rear of McNeill’s car. “I had to keep on moving, stay focused on the gun fire and on the task at hand,” he writes. Mireles realized he could prop the shotgun on the car’s bumper to aim it at Platt and Matix who had gotten into the front seat of Grogan’s car. He fired, cycled the pump action shotgun by clamping the buttstock between his legs, sliding his right hand up and racking the action one-handed. This he laboriously did over and over.

Platt staggered out and shot toward Mireles before lurching back to Grogan’s car. Nearly unconscious, Mireles drew his revolver and struggled to his feet. He describes concentrating on his sight picture despite extreme tunnel vision. Other agents saw Platt aim a revolver, too, but Mireles could not. He neither felt nor heard the recoil and noise of his shots, but he aimed, fired and killed Platt and Matix.

Agents Jerry Dove and Ben Grogan were dead, but Mireles and the other agents eventually recovered. Much scrutiny followed the shoot out and Mireles candidly addresses the most common criticisms. He relates with equal forthrightness the psychological and physiological phenomena that he experienced. A review cannot even begin to do justice to his story, so let me just give a profound recommendation that anyone who carries a gun needs to read FBI Miami Firefight.

Mireles’ story was not over when he retired from the FBI in 2004. His website https://edmireles.com/bio/ notes that he worked as a contractor during the Iraq war. I hope Mireles continues to write, including the book promised on his website about his work as an undercover narcotics agent later in his FBI career. For now, FBI Miami Firefight is in print, and it is highly recommended.