The Joys of Travel

As I write this, I am sitting in Denver International Airport, returning home after a planning session for The Best Defense TV show (http://outdoorchannel.com/the-best-defense), as seen on The Outdoor Channel. It is always fun to see the guys from the show and the behind the scenes guys, too. I am looking forward to getting to work on the show this year again. Many, many people came up to me at the NRA show last month and said hi, told me how they like the show, and what I do on there. Hopefully we will not disappoint this year.

I do have a little adventure to report. The adventure is what happens to travelers who fly, but are clumsy enough to leave their driver’s license at home. I would not recommend it. I find it truly bizarre that the TSA group in Portland, OR treats people very differently than the TSA group in Denver.

When I arrived at the airport yesterday morning for this quick trip, I had realized that I had left my driver’s license sitting on my scanner, as I had needed to scan it for a separate reason. When I showed up at the terminal, the ticket issuer was happy to take my picture ID in the form of a State Issued Concealed Carry License. Okay, so far, so good. Next stop was the TSA screening process where, with my three different state-issued concealed carry licenses in hand, I told the TSA personnel what happened. “No problem,” they said, “please continue.” So far, so good. 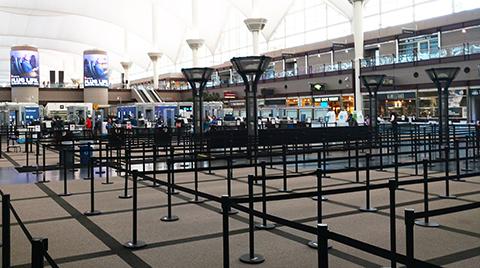 Of course, there were no problems upon my arrival in Denver. It was upon my return home this evening that I started the process backwards. Again, no problems at ticketing check-in, but then things changed. First, I marveled when I saw absolutely no back up at the security checkpoints. In fact, it was such a rare event, that I photographed it for posterity.

I approached the ID checker, concealed carry licenses in hand, where the gal asked me just what type of ID this was. I explained and then told her what had happened. She said, “No go, wait here.” Oh boy.

The next TSA officer (her name was Anita and I sorta bonded with her) asked me if I had any credit cards. Of course, I had some, so I figured when I showed her that would confirm my ID and all would be good. Nope. She asked someone else about what she should do. She said she would have to “call it in.” Well, okay. Whom they were calling I never found out, but I had a pleasant 10-minute wait at a little desk while she talked to someone there. This unnamed official then told my personal TSA officer that she needed to get a “Manager’s” approval. By then she was as frustrated as I was by the run-around (I think she had a thing for old, gray-bearded men). So, she left me sitting at the desk and went off to find the manager, but first she asked another agent, a young bearded guy, to sit with me.

The young man was curious about what was going on, so I told him. He asked, “Don’t you have any credit cards?” I said, “Yes, of course,” and added that I had already shown them to several of his fellow officers. He shook his head and asked, “Well, don’t you have a Costco card?” At that time, I kinda laughed and said, “Sure, I do. It is in my wallet!” He asked me, “Well, why didn’t you show her? That is all we needed!”

I showed the guy my picture ID--in the form of my Costco card--and about that time, Anita, my personal TSA officer came back, all smiles and said, “You are good to go; we don’t even need to pat you down!”

Figuring I had better not push my luck, I simply thanked her and moved on.

Later, I looked up the TSA regulations (https://www.tsa.gov/travel/security-screening/identification) to determine which state issued photo ID is allowed, and the TSA website listed what was acceptable and then in small print at the bottom, it stated specifically, “A weapon permit is not an acceptable form of identification.”

The moral of this story is don’t forget your state-issued driver’s license, but if you do, make sure you have a Costco card with you.

Back at the Network we recently filmed an hour-plus educational DVD for our members, featuring Network member and The Best Defense co-host Michael Janich. His presentation deals with the legalities of using a knife for self defense. The editor tells us that the footage looks good. When it is available to be sent out to you, we will let you know. 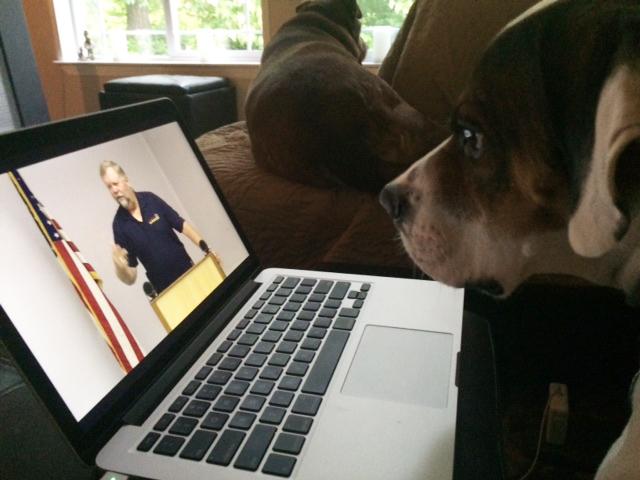 Turns out that I have a new fan! While our video editor was working on the footage, his boxer, a deaf rescue dog named Dozer, became transfixed by my onscreen presentation. We got such a chuckle out of the photo our editor, John, shared that we thought you might find it amusing, too!

No Fluff, No Puffery

We recently received the following e-mail, from someone checking out the Network:

“Thank you so much for your quick response. I am an ex police officer and still in the military reserves. I know some of the laws have changed in the 10 years since I have worked in the field. I have been researching different sites to see who has the best policy, but like I said there is a lot of fluff in some of these. Your website seems to be the easiest one to understand and it really goes into detail on all the things it covers, unlike some of the others. Thank you.”

I was greatly pleased to see that our straight-forward approach on our web site and the membership benefits we offer is understood and appreciated.

If you Google the different names of the different programs, you will find out what the gentleman with whom we corresponded is speaking about. Frankly, I don’t have the time or stomach for it.

Click here to return to July 2016 Journal to read more.