Rory Miller once wrote that fiction about violence focuses on dramatic action without exposing the reader to the smell and sound of death as bowels release, the respiratory death rattle, the extreme thirst of the dying and the time between mortal injury and death. When using violence is theoretical, it’s easy for those studying the subject to miss the big picture. Violence of Mind by Varg Freeborn is a good antidote. “My simple goal here is to share my first-hand experience with extreme criminal violence… so the average person can begin to understand how violence works in our society,” Freeborn writes in his introduction. “I am not shy about supporting the use of lethal force to stop an imminent deadly threat,” he notes, but urges readers to “know and accept the consequences.” 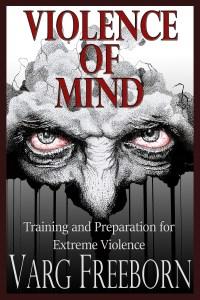 I got hooked into reading Freeborn’s book through his focus on mindset. “When we go into the gym or on the range, we should be working the fundamentals. The rest of the time, we need to be building the mindset. Weapons and fighting skills only make up 20% of a fighter’s capability. The other 80% is determined by what takes place in the mind,” he writes.

I’m generally leery about the “learn from convicts” trend, however, Freeborn, raised in poverty, surrounded by substance abuse and crime, jailed after a self-defense stabbing as a teen and now with his rights fully restored, makes the point that, “The truly violent predator has mastered doing it with very little equipment and very simple methods,” explaining later, “Violence ability also is not just the willingness to do violence either. I have come to believe over the years that true violence is something that lives in your heart, meaning it is deeply rooted in your orientation.”

Clearly, most layperson’s understanding of violence is radically different than that of a predatory criminal and I hoped Violence of Mind would instruct without words wasted on macho chest beating. It did. Freeborn writes, “Anyone who tells you a glorified story of what it will be like to drop some worthless criminal dead and how you should not give a shit about it clearly has not been touched by the life-changing damage of deadly bloodshed. Sometimes we learn the most not from the winners, but from the losers.”

Freeborn encourages readers to determine what you’re so attached to that you’d kill or die to protect it. This differs from “boundaries put on you by outside influence, e.g. the laws. These parameters are internally created boundaries and are directly affected by your attachments to your loved ones and to your own life,” he explains, then gives examples of bad decisions, including a fatality shooting over who was first in line at a pharmacy. The question of who started it is the wrong question. Ask instead, he urges, “Is it worth dying, leaving your family behind and forever extinguishing anything you would go on to do with your life?”

Freeborn explains there are often repeated opportunities to withdraw from arguments, calling these moments “pivotal crossroads.” You must distinguish between verbal aggression and physical. “Remember, it does not matter what someone is saying. When it comes to justifying your actions in a confrontation it only matters what they are doing in the moments prior to you making physical contact.” He reminds armed citizens, “You have the means to deliver deadly force. You may believe you are just standing your ground assertively, but you have no control over how the other person will react and escalate. Nor can you accurately predict their reaction.”

Normalcy biases falsely suggest that the worst end to an argument is harsh words and a bloody nose. “The truth is you do not know what threat level the person is or how far or how quickly they are ready to take it up the violence scale,” he stresses.

Another misconception equates avoiding confrontation with “cowering,” Freeborn writes. It’s not! “There is no real lasting effect on you, other than your hurt feelings and pride. Think about that deeply. I am the first one to say that you have the absolute right to defend yourself with deadly force from violent attack…but there are some qualifiers for what is and what isn’t self defense.” He continues, “If you are prepared to use deadly force to defend yourself, you better be EQUALLY prepared to articulate why you used that force to the law.”

Refusing to fight requires an iron will, he stresses. “Self-control is the #1 mistake made in the avoidance category. Having a strong and effective mindset isn’t just about always being alert and ready to jump into action. Proper mindset involves enormous self-control. Not only for anger and ego issues, but for fear and other emotional spikes which will disrupt your rationality and push you into crossing the line away from self defense and into criminal charges.”

“Proper mindset isn’t just about being ready to fight; it’s about maintaining control over yourself under pressure. Simply put, the most effective combat mindset is having extreme self-control in any conditions,” Freeborn writes. “Being able to defend yourself with clear justification for your actions and decisions is just as important as being able to defend yourself with fists or a gun. There’s more than one way to lose, and lose is exactly what you will do if you run your mouth or establish a mean or violent reputation. Quit setting yourself up for failure. Be a positive example for the right to self defense. Articulate your reasons well. Do not discuss deadly violence loosely. One day your life may depend on everything you have ever said about the subject, and every way you have prepared, and every class you have taken.”

Violence of Mind gives an alternative view on situational awareness. Freeborn worries that much of what is taught as self-defense awareness leads tunnel vision at moments of greatest danger. “Wide-band situational awareness” is most needed. A common error is looking for what we’ve decided is dangerous instead of looking at everything, he continues. Since few live in hostile environments, “you must cultivate a wide-band SA through training and conditioning,” he advises.

“Training is notorious for creating ‘plans’ and plans do not work as well when they involve other humans who are not in on the plan. Procedures, however, do work. This is why we learn skills, develop techniques, and then learn to combine them into procedures to deal with a problem.”

Although too detailed and lengthy to cover in a book review, his analysis of techniques and tactics, principles and procedures could change what you seek and what you take away from your next self-defense class. “Fights just do not look anything like the practice on the square range.” Be sure you practice fundamentals like strong positioning and techniques that allow essentials like mobility, he urges, warning against flashy techniques created on the range against unarmed opponents.

Practice should focus on smoothness and correct execution, not speed, he stresses, endorsing deeply engrained fundamentals over specific situational skills. “Dozens of decisions can be made in the span of a few seconds, and in a lethal force conflict those decisions could mean the difference between living or dying.” Decision making eats up time. Unlike you, the predator has used extreme violence repeatedly. In his culture, the violent thrive and won’t hesitate to hurt you. While not suggesting that readers emulate that background, Freeborn explains, “When your life is threatened, and all of the legal criteria for justified lethal force have been met, then speed, efficiency and ruthlessness better be all that are on your mind. The only way to clear your mind of everything else and be able to focus on your job is to train yourself to that automatic level, both mentally and physically, and to fully believe in what you are doing without any doubts whatsoever. Like your attacker, your willingness to follow through must be clearly worked out well before any encounter takes place. This includes knowing what you are allowed to do to stay out of prison.”

Returning repeatedly to the theme of self control, Freeborn shows how thoughts and words are reflected in how one fights. “You are who you practice being,” he stresses, reminding readers to live their mission every day in word and thought so those habits guide decisions made when threatened. Violence of Mind included outstanding coaching and is timely in its reminder to strive daily to live our ideals. I recommend it.