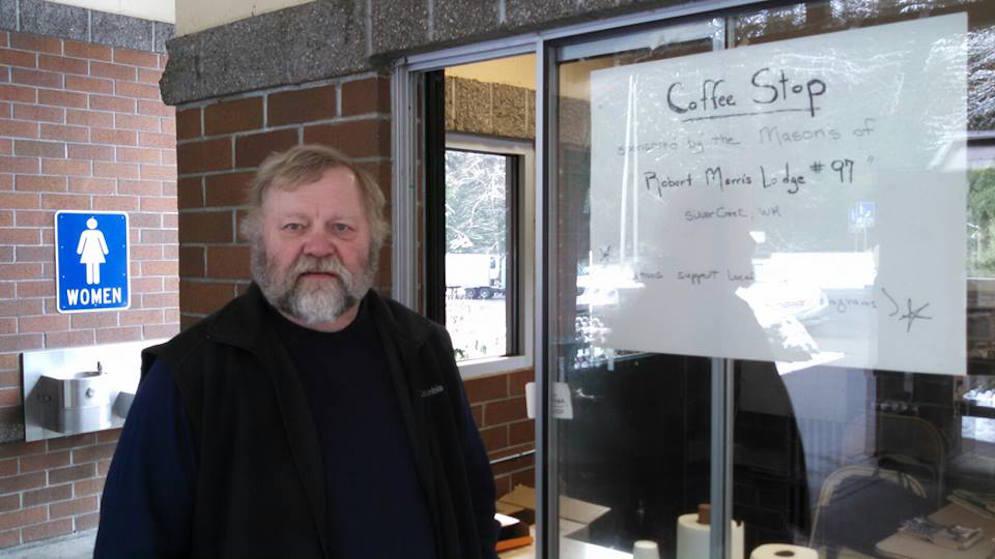 What have you done for your community lately? I mean, what have you done other than obeying the law and paying taxes? I ask this as I begin writing this month’s President’s Message (my 97th such message in a row). Masonic Brother Mike Webb took the picture to the right as I relieved him from the Interstate rest area coffee stop put on by our Robert Morris Lodge #97 of the Grand Lodge of Free and Accepted Masons of WA State. The coffee stop is a small thing our lodge does once a year, and it raises money for college scholarships.

I make this my lead comment this month because if one of our members is prosecuted after a shooting AND that member testifies on behalf of themselves (most likely, elsewise how will the jury learn WHY the member felt his or her life was in danger) then the prosecutor might just try to paint that Network member as a “gun-nut” as did Pima County DPA Daniel Niccolini in the Larry Hickey trial (read about it at https://armedcitizensnetwork.org/images/stories/Hickey_Booklet.pdf).

You see, for many prosecutors trying an armed self-defense case the goal is not seeing justice prevail; the win-loss record is most important to them. They might just take your active participation in the shooting sports and self-defense training and try to use that against you. The questioning might go like this: “Is it not true that you spend the majority of your free time reading about guns, shooting guns and otherwise fanaticizing about guns?”

Could you answer that question something like this: “Counselor, while it is true that one of my hobbies is guns, I have many more activities of which I am more proud. Would you like to hear about those as well?” What is he going to say? If he declines, your attorney would want to bring up this line of questioning, as was done in the George Zimmerman case. He was able to successfully dispel most of the accusations that he was racist when it was shown that he tutored black kids in his free time. Something to think about, huh?

We Are a Multi-Cultural Nation

As I sit here at the rest stop coffee stand, I have interacted with a couple hundred or so people traveling on I-5 in Southwest Washington. It strikes me that we (the United States of America) are no longer a predominately Caucasian nation. In fact, I would estimate that most travelers have something other than European blood coursing through their veins. I find it rather interesting sociologically, and find it somewhat astonishing that my heritage (Germanic/Polish/Norwegian) is a minority in this country. What bearing does this epiphany have on self defense? Not much, but when one has been sitting for a couple hours without much going on other than telling weary travelers about the hot coffee and cookies, the mind starts to wander.

Please indulge me for a moment. I have only been a Mason for a little over a decade, but knew about the organization for most of my life. When I was a young boy growing up in Harrison, ID, our house was next to the local Masonic lodge. I remember seeing the fine old gentlemen dressed up in their suits and top hats gathering once a month, and I always wondered about what went on in the Masonic Temple. When I became a young adult and visited the graves of some of those old men, I realized that the city fathers of my home town all had Masonic symbols on their headstones.

Later in life, I had occasion to meet some very fine individuals, mainly though my shooting school, and several of those guys were also members of the fraternity. When I finally decided to join them myself, I came to realize that belonging to the Masonic fraternity wasn’t about secret handshakes and world domination, but instead, in part about simply being there to help your fellow man.

When becoming a Mason, one pledges to come to the aid of distressed brother Masons and their families. In fact, being a card carrying Master Mason means I have brothers far and wide across this great nation and worldwide. I know that if I were in trouble, all I would have to do is find the nearest Masonic Lodge and there would be a brother Mason there to help me. To me, that is pretty powerful, and the main reason I joined was to be a part of that brotherhood.

Being a member of the Network is a lot like being a member of the Masonic lodge. When you are a member of the Network, you join a group of fine men and women, scattered throughout the country, and any one of them would, I am sure, stop what they were doing and help out a Network member in trouble if they could. Of course, there is also the growing number of Network Affiliated Attorneys who will be there for the member, with the Network picking up the tab for the legal fees, as it has done on behalf of thirteen members so far. (For more of this, see my State of the Network message). The fine men who founded our country, George Washington and Benjamin Franklin were Masons; similarly, the Network was founded by the best of the gun industry: Massad Ayoob, John Farnam, Tom Givens and the late Jim Cirillo. If today’s gun culture had a group of founders, our advisory board would be amongst that group.

See You at SHOT!

This coming month, Gila, Vincent and I are off to SHOT Show to see what’s new in the industry. During this convention, we also take the opportunity to meet with the Network Advisory Board and fulfill our yearly commitment to discuss with them the Network’s growth and to ensure that we continue to serve our members well.

We may not be the biggest self-defense aftermath program now, but we surely are the most experienced and dare I say, the best in what we do.

Click here to return to our January 2017 Journal to read more.