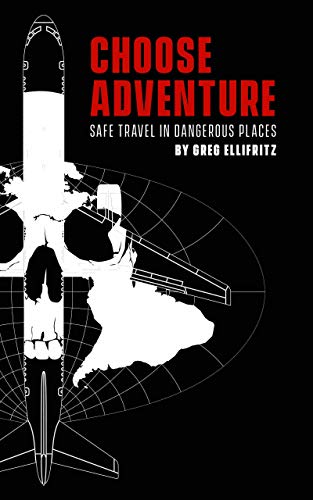 Applying lessons from indirectly related instruction is a little strategy I’ve found to be an effective way to learn and retain information. This month, having been gifted a copy of Choose Adventure by instructor and blogger Greg Ellifritz, I found the pages I was reading applicable outside of world travel. Although his book addresses travel to developing countries, as he writes, it also teaches “the social skills necessary to navigate an unfamiliar environment. This book will also prepare you for the relatively rare occasions where you might have to face greater danger. I will show you how to survive natural disasters, riots, and crowd violence. I will teach you how to use improvised weapons, how to avoid criminals and scam artists, and how to escape a kidnapping attempt or terrorist attack.”

One cannot doubt that Ellifritz is qualified to teach survival skills. A career police officer and trainer, he writes that he amassed “over 75 different police instructor certifications, mostly in the subject matter of police use of force [and]…became a court recognized expert in the fighting arts. I taught police officers how to psychologically manipulate contacts with violent criminals to avoid violence. If those tactics failed, I taught officers how to win physical fights with pepper spray, impact weapons, their firearms, and their bare hands.”

Ellifritz discusses the terms “developing” and “third world” countries as distinct from “first world” nations. I found many of his observations about safety in third world countries applicable domestically. For example, illness and injury presents different challenges when abroad, but even if the reader never leaves the U.S., there’s value in Choose Adventure’s thought-provoking discussion of common ailments as preparation to survive civil unrest, ventures into wilderness or under-developed regions, or just daily well-being in case an emergency arises. A section on foodborne illness is a useful self-help reminder and after reading Ellifritz’s advice on treating injuries, I added a couple of items to my first aid box. I appreciated the refresher in tourniquet use, too.

For travelers arriving in an unfamiliar locale, he stresses the importance of daytime arrival to allow for a walk around the neighborhood to “scope out ...  potential problem areas.” He explains, “These guidelines may be pretty basic, but using them will give you a quick assessment of your relative safety in any neighborhood in the world,” going on to list the presence of armed guards, rundown or uncared for properties, graffiti on walls, obvious security measures “like broken glass embedded atop walls, electric fences, barbed wire,” and aimless loiterers in the street and pedestrians traveling in small groups not singly. Watch the reaction of people in the area when they see you, he continues, citing the book Left of Bang's teachings about indicators of impending trouble including detecting changes in the local routine and reactions of the locals.

Safety in crowds is another topic that applies anywhere and although the context in Choose Adventure applies to sporting events, it is applicable to safety in any crowded venue. Ellifritz teaches, “Crowds are more likely to be deadly at the entrance of an event than at the event’s conclusion. When crowds are leaving, there are generally multiple exits. On entrance, everyone is usually funneled through just a few entry gates, making it far easier to be caught up in a bottleneck and trampled on by the pressing crowd. If the crowd seems violent or surging, hang back. Don’t be in a hurry to get in. If you know in advance that the event is going to be crowded, consider arriving at off-peak times, either very early or after the game has already started,” He suggests, “Be exceptionally careful leaving the event. It may be smart to leave a bit early so that you aren’t out in the streets when the majority of the crowd exits the stadium.”

You don’t need to be a sports fan to get caught up in crowd violence. “Be cautious using public transportation near large sporting events. Even if you don’t attend the event itself, you may encounter sports hooligans, rioters, or drunken fans in the subway or on the bus before and after the big game. There are usually numerous bus stops, taxi stations, and subway entrances near any large sports stadium. Avoid those stations and stops when they are crowded with rowdy sports fans,” he writes.

A common risk is approaches from strangers who may see you as an easy victim, Ellifritz suggests. You can easily identify hustlers who call you “friend,” say they just want to talk, or are complimentary, and he advises that any of those approaches warns you not to engage in conversation. Beware, he continues, of appeals for help, as well as tests of your compliance by a stranger who is too persistent, talks excessively and what they say doesn’t comport with their actions or tries to give you something. Pay attention if your intuition warns you even if you can’t consciously identify what is incongruous. A later chapter of Choose Adventure teaches “the art of disengagement” and identifies the dangers of criminal teamwork, how to recognize it and break the contact.

“Pre-assault indicators are universal,” Ellifritz writes. “It doesn’t matter what country you are visiting. Be alert when you start seeing any predatory movement patterns or deliberate approaches in a crowd.” He provides a good list of gestures, expressions, body positioning, actions taken to alleviate stress that’s building up as the assailant prepares to attack, as well as commenting on the place in the timeline that recognizable cues like the target glance and the witness check occur. “The display of any one pre-assault indicator or body language cue is not enough to instantly brand the person who displays it as a serial killer. ‘Normal’ people sometimes make these gestures as well. Look at clusters of signs. When you start seeing two, three, or four different indicators, recognize that you are likely being groomed for a criminal attack.”

After a good discussion of behavior and appearance that suggests an imminent attack, Ellifritz turns the tables and introduces, “We’ve talked about criminal pre-assault indicators, now it’s time to discuss ‘victim indicators.’ What makes a criminal choose a particular person as a victim?” He discusses behaviors that signal a submissive person, or one that is experiencing discomfort, again quoting a book we’ve discussed in these pages before, Left of Bang.

Warnings about the more mundane dangers of being intoxicated while a tourist are equally applicable to life here at home, although the availability he describes in other countries is substantially different. Even alcohol use creates an opening for watchful criminals, he warns.

Reality checks are important in books about survival planning. Ellifritz writes several chapters about travel weapons and improvising what is at hand for self defense. He advises that, “One has to solve not only the problem of surviving the initial violent encounter, but the secondary problem with the police and the criminal justice system as well. In other countries, the ‘secondary problem’ won’t likely be a fair trial by a jury of your peers; it might be an angry lynch mob. You aren’t prepared to defend yourself unless you can handle that issue as well,” ending with an echo of multiple earlier suggestions that behaving politely, smiling, and acting respectful.

He discusses safely weathering tsunamis, earthquakes, volcanos and civil unrest while a tourist. Of civil insurrection his advice is an echo of Marc MacYoung’s advice in the January 2021 and this edition of the journal. “The best advice I can give you is to pay attention to your surroundings and have an escape plan for every location you visit. When you see things starting to go bad (massing police, masked looters, people setting fires), GET OUT! Implement your escape plan. Don’t stick around and become a target for police batons, gangs of teen looters, or panicked crowds. Usually, the people who get hurt or killed in these events are the people who aren’t paying attention or who want to stand around and be a spectator.”

Don’t run, but walk directly away toward safety, avoiding eye contact, Ellifritz continues. If surrounded by a large mass of people, try to get your back to the wall and let the crowd move on by, minimizing the numbers you have to deal with simultaneously, or being bypassed entirely, he teaches. As a tourist, you are easily recognized as an outsider, and that makes you a natural target for rioters. He also outlines survival if caught in a car by a rioting mob, including the tip to keep windows down a half-inch to make them harder to break, studying up on alternative routes for escape, how to drive through a crowd if you must, and concerns for families or companions traveling together.

Understanding and escaping bomb threats is the topic of a chapter, including bomb appearance, lethality, what to do after a bombing, the risk of continued hostilities, the likelihood of multiple bombs, safe evacuation locations, and where to stage to treat casualties.

Terrorism and hostage-taking, while uncommon, carries a different set of considerations overseas than here in the U.S., Ellifritz writes. Armed Americans are not well served by our government’s “dumbed down” advice to “run, hide, fight” he opines, but as an unarmed traveler visiting a country where privately carried firearms are exceedingly rare, the question becomes your ability to run away effectively due to health, clothing choices, responsibilities to small children, or environmental issues like darkness, very close proximity to the gunman or being trapped where the only exit is in the direction of the shooter.

“If unarmed, you should think about running as a response if there is a good chance you can get away before the killer sees you,” he advises. Hiding or barricading has mixed results, he continues, but can be effective if a secure room with locking door and no windows is at hand, with several exits in case the shooter gets in, or if the hiding place offers temporary shelter while help arrives. Hiding is still “nearly last on the list of options for the majority of active killer events” in Ellifritz’s view.

“That leaves the final option of fighting. Again, the circumstances dictate the tactics. Is this a lone teenage boy trying to stab people with a knife or is it a team of 50 armed terrorists trying to corral you into a mass hostage event? Your ability to succeed while fighting is determined by both your abilities and the abilities of your potential attackers.” Still, unarmed citizens have stopped active killer incidents, as researched by Ron Borsch, he cites, and fighting is viable if the place you barricaded has been breached, the killer is within arms’ reach, you have some kind of weapon–if only a knife or pepper spray, you can ambush the shooter, you team up with a number of other people who are willing to fight, you have fighting skills, and observe a weapon malfunction, reload in progress, or the killer drops or sets down his gun.

The latter points underscore the import of waiting for the right opportunity, Ellifritz continues. He discusses chokepoint ambushes, strategies for group counterattack, summarizing, “The goal is to end the fight as quickly as possible so that more people don’t get hurt or killed.” Although the context is overseas travel, the information is extremely valuable for those who work disarmed in the so called “gun free” zones, travel out of state where their carry license is invalid, and other scenarios about which we worry.

An avid reader of Ellifritz’s Active Response Training blog, I have to admit that I’ve long hoped he would compile his work into a book. While Choose Adventure sets a different context, it was much of what I’d hoped for. I think our members will enjoy reading it, too.