“A lot has happened since I published the last edition of The Concealed Handgun Manual in 2011,” writes Chris Bird, by way of introduction to the seventh edition. Now in his 70s, Bird shares a lifetime of training and shooting experience with new concealed carry practitioners. This book addresses much more than guns and holsters, although there is plenty to get new practitioners off to a good start with their carry gear, too. 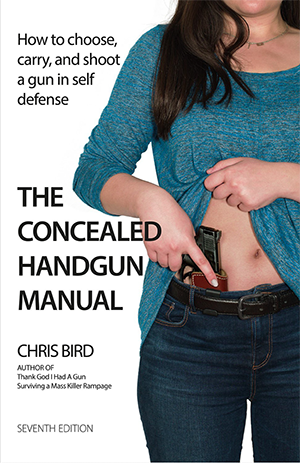 The Concealed Handgun Manual starts with a discussion of situational awareness. Like most of Bird’s key lessons, he leads with the true story of senior citizen Sylvia Hall who deterred home invaders, learning later that an elderly woman just down the road was victimized by the same violent youths. She determined that their behavior was unusual and was ready to defend herself, he relates.

“It is not enough…to tell someone to be alert and stay safe,” Bird opines. “You must tell them how to be alert and how to recognize the danger signs.” He interviews retired CIA operative Ed Lovette to detail factors that are warning signs, including how threats make eye contact, and other indicators from respiration, stance and positioning. He discusses team tactics used by criminals and relates other real-life stories showing how attacks develop. “Break conventional thought patterns by assessing what you are really seeing,” he advises, listing indicators that a predator may be watching you.

Although this is a gun book, Bird warns against thinking a gun solves all threatening situations. He tells the story of a carjacking in which the first indication of trouble came when the driver saw a gang member pointing a shotgun at him. A later chapter teaches firearm retention and disarming skills, other physical force options and de-escalation and conflict resolution round out the instruction.

Bird illustrates law enforcement’s inability to protect against violent crime, recommending proactive steps like simply wearing your gun while you’re at home. He cites inspiring examples of citizens making their safety their responsibility–not government’s. “For decades, Americans have been brainwashed into taking a passive role in their own survival,” he writes. “‘Leave it to the experts’ and ‘wait for the authorities’ we are told in chorus by government officials, politicians, and the media.” The result, he comments, is passivity allowing terrorists and criminals to do what they wish until a few brave (and in the example of the passengers of Flight 93, unarmed) citizens fight with whatever they have.

In Bird’s chapter on mass shootings, I was pleased he did not name the killers, denying them fame. He cites a Texas State university study that identifies ten incidents in which citizens–both armed and unarmed–stopped the killings. He tells the story of Stephen Willeford, the NRA instructor who in November of 2017 pulled an AR15 rifle out of his gun safe, then rushed to a neighboring church to stop a killer. Although not a church member nor present at the shooting that took the lives of 26, Willeford chose to intervene. Told primarily in Willeford’s own words, these pages describe running toward danger, spotting a gap between the front and back panels of the killer’s body armor and teaming with a complete stranger to pursue the fleeing shooter, worried he would continue killing elsewhere.

Besides detailing the incident and aftermath in his conversation with Bird, Willeford discusses changes he has since made in his readiness and preparation. These include keeping magazines loaded and ready, a decision to renew his carry license (although carrying a self defense pistol was not the issue during his shooting), as well as the loss of anonymity. He also explains, “I learned real quickly I needed a lawyer right away. Not for defense from legal systems but for the media…If you are involved in something like this, the media is going to come at you like you wouldn’t believe.”

Bird also teaches other lessons about stopping spree killers through the stories of Jeanne Assam, who shot and stopped the church shooter in Colorado Spring, CO, Suzanna Gratia-Hupp who saw her parents murdered in the Luby’s Cafeteria shooting and Joe Zamudio, who was one of the several citizens who stopped the shooter who harmed Gabrielle Giffords and her constituents at a political rally.

Each story identifies difficulties inherent in intervening. Bird quotes Tactical Defense Institute’s John Benner, “When do you display your firearm? Do you start to run through some place with the firearm out? Now maybe another concealed-carry holder, or an off-duty police officer, or an on-duty police officer sees you running with a gun in your hand.” This problem involves not only reactions to guns from police officers but from and toward fellow armed citizens, as well, and the Zamudio story well-illustrates the complexity of a mass shooting incident.

Resistance saves lives even when unarmed in so called gun-free zones, as was demonstrated at Virginia Tech. Young students “can and should be taught to fight back,” Bird quotes the founder of the Alert, Lockdown, Inform, Counter, Evacuate (ALICE) school shooter response training. Bird shows proof of effectiveness in the story of Jake Ryker, the 17-year-old who, aided by his brother and other youths, stopped a 15-year-old who was shooting students with a .22 semi-auto rifle. Although Ryker was wounded in the fight, they stopped the killer before more could be shot.

Bird also shares a wealth of basic information for newer gun owners, including ammunition selection, caliber, stopping power and the importance of bullet placement. His discussion of revolvers and semi-autos includes interesting facts from history, and he identifies the competing needs of “convenience, power, and accuracy” in carry gun selection. Holsters receive a similar review and a segment on gun safety outlines balancing safe storage against readiness. He stresses, “The best way to keep your self-defense handgun out of the hands of children and others is to wear it. If you are not wearing it, and it isn’t under your direct control, it must be made secure.” For rifles, shotguns and guns not in use, he recommends gun safes that range from hidden wall safes to large gun safes bolted to the floor.

Bird opens the chapter on handgun accuracy with the story of a police officer shot while on patrol. As the shooter runs away, the officer fires and misses, then bears down, applies the basics and hits his would-be killer twice–at 422 feet. Sight picture, grip, stance, trigger control, speed, recoil and a variety of topics relating to accuracy round out the discussion. He also addresses flashlight use and lasers, honing shooting skills, practice and competition, cover and movement, shooting from disadvantaged positions, malfunctions and reloading, alternative target areas and head shots and more.

Bird introduces mental preparation with stories of two intended victims of armed robbery. He discusses willingness to take life, tactics, physiological reactions during life-threatening danger, and later discusses memory distortion after a critical incident as well as posttraumatic stress disorder. He outlines the realities of interacting with law enforcement after the shooting, the expense, possible job loss, civil lawsuit, working with an attorney and statements to police and other related concerns.

The Concealed Handgun Manual is a hefty compendium addressing a wide range of topics. Experienced armed citizens will enjoy considering Bird’s views on these topics while those just starting their armed experiences can learn much from it.