Five years ago, we eagerly reviewed Massad Ayoob’s first volume of the Gun Digest Book of Concealed Carry in this electronic journal. It taught us as much about “why” we carry concealed handguns as “how”—different ways to do it, to name only a few high points, and we gave it top recommendations. Of course, it contained plenty of instruction about guns, various calibers, different types of holsters, and a great variety of related topics. Who but Massad Ayoob, 60-some years into his experience carrying guns for personal defense, could find more to update, highlight and explain?

Well, as it turns out, in addition to more options and variations on holster and carry methods, experiences gathered by Ayoob and those in his circle, there is more than enough to fill a second, equally interesting 250 page 8x10 heavily illustrated edition. By way of introduction to Concealed Carry Volume 2, Ayoob urges his readers to dig in and learn from the experiences of others, to avoid having to painfully repeat the lessons! Good advice! 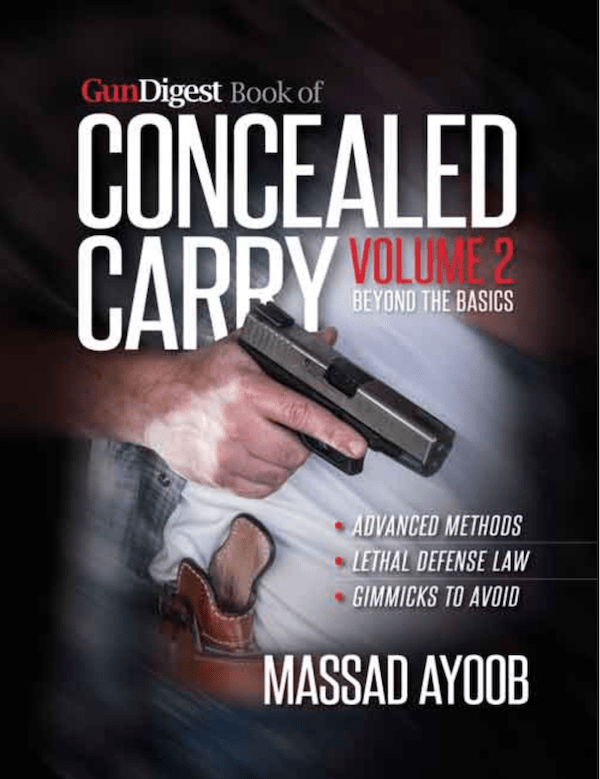 In the first chapter the reader is treated to a review of carry optics, as quantified by Karl Rehn, including his opinion that as a sighting aid, the green laser is under-rated. Pros and cons of carrying pistols in the appendix position features Network President Marty Hayes counter-balanced by AIWB proponent and holster designer Spencer Keepers. Ayoob further discusses both equipment innovations and physical procedures to avoid accidentally discharging a pistol during holstering.

The next chapter goes back to basics, illustrating the draw stroke from strong side belt holsters, shoulder holsters, ankle holsters and cross-draw holsters, as well as what to do if blocked while trying to draw. Additional topics include drawing while seated in a car, using a pocket holster, and refinements to presenting the gun from the holster to target. Refinements and advanced knowledge are the themes in Concealed Carry Volume 2, as this segment amply illustrates.

Pros and cons of hip holsters, more on appendix carry, inside the waistband and outside holsters, all are enumerated. Ayoob analyzes the time required to accomplish the various steps of drawing, then observes that the most time-intensive element—and the one most subject to fumbles—entails getting the gun out of the holster. “Weaselcraft” practitioners surreptitiously get a shooting grip on the holstered gun while keeping it out of sight. The result is a draw stroke that takes less than half the time ordinarily needed to draw and fire, he accounts. He gives pocket carry, ankle holsters and shoulder holsters similar study and commentary.

The chapter, Hardware to Avoid, explains why single action revolvers aren’t optimum for self defense, and outlines reasons that novelty guns aren’t the best choice, either. Ayoob comments on minimum cartridge capacity and offers a long discussion of light trigger pulls. He debunks popular myths including suggestions that no one but you will know your gun’s trigger is dangerously light, that a justifiable shooting won’t lead to a detailed investigation and inspection of the weapon used, that “there has never been a conviction resulting from the hair trigger allegation,” that light trigger pulls aren’t a problem if you keep your finger off the trigger until you need to shoot, or that justifying a light trigger pull by claiming it let you shoot more accurately so was safer for bystanders will pacify the trier of fact. This he wraps up with a discussion of acceptable trigger pull weight ranges. Likewise, frivolous or novelty gun décor like skull or zombie artwork and bloodthirsty engravings all provide “red herrings” with which an attorney can distract a jury from the justification of self defense, Ayoob stresses.

Under the title of CCW Social Issues, Ayoob addresses the contentious issue of open carry. He even-handedly comments that he does not oppose open carry, explaining, “I would like to see open carry made legal nation wide without specific license, for any adult with a clean criminal record who has not been adjudicated mentally incompetent.” Even a short waiting period to get a carry license is too long when being stalked or otherwise threatened, he explains.

Ayoob advocates legal open carry for practical reasons, not for political statements, noting, ”I’ve never met an anti gunner who became pro-gun after seeing someone with a firearm where they weren’t accustomed to seeing one. The idea that flaunting guns brings converts to the 2A cause has never been substantiated, and probably never will be.” Many oppose open carry and Ayoob addresses these arguments, too. He cites reports of guns taken forcibly from open carry practitioners, and notes that hatred has resulted in 9-1-1 calls to report a mass murderer about to start killing people when in reality, the cause of the fear was an unconcealed firearm.

Other pitfalls for armed citizens that arise in social situations include alcohol use. Ayoob notes that each state has various stands on what constitutes intoxication. Know the law, he urges, giving an interesting study of Texas law as an example. Other “social” topics includes carrying at home, about which he comments that studying reports documenting home invasions underscores that quickly-executed break ins are best stopped by a gun carried on-body and he highlights carry methods to help keep a gun with you while at home.

Much of Concealed Carry Volume 2 focuses on myth busting, including a chapter that asks whether center of mass really is the best aiming point, whether it is better to land the hit first or to hit where most likely to incapacitate, the need to carry enough ammunition, why the caliber debates are so misleading, why just having a gun is not enough, the rationale for carrying extra ammunition on your person, aimed vs. point shooting, and more. He does a great job of showing why popular “sound bite” and myths are overly simplistic. For example, discussing aimed fire v. point shooting, he opines, “As with so many questions of gunfight survival, it is not a question of this or that; it is a mandate for this AND that.”

Caliber and ammunition performance earns its own chapter, with lots of history. Ayoob notes, “The same experts who argue that medium calibers equal larger calibers (particularly at similar velocities) tend to also say that ‘energy’ is meaningless in the wound ballistic context…yet we are discussing how to deliver a powerful blow that disrupts an opponent’s ability to harm, and ‘powerful impacts’ and ‘physics’ cannot be entirely separated…‘energy’ by itself does not determine the outcome of a gunfight, but when rating the power of a given cartridge to cause fight stopping damage, it turns out to be one good way to keep score,” he explains, having quoted a wealthy man’s quip that money wasn’t everything but was a good way to keep score. Other issues include controllability, and the side benefits of speed and accuracy, all of which Ayoob discusses in detail.

One of Ayoob’s great talents is teaching the history of our art. Through these stories, the reader learns how the world of the gun reached certain conclusions and why. For example, discussing ammunition effectiveness, he draws on studies by such diverse experts as the FBI’s Patrick Urey, to Jack O’Connor and Elmer Keith. From the wisdom of Keith and O’Connor, Ayoob summarizes, “The mechanism of wounding and destroying tissue takes second place to shot placement; not how the bullet damages tissue, but what tissue is rendered inoperable.”

Concealed Carry Volume 2 epitomizes Ayoob’s instructional style. In early chapters, he mentions a principle or pro-tip, then a later chapter will reiterate and expand upon the idea. It works well: the idea is planted early, then later details build upon other discussions to cement the lesson. Avid students will find segments of the Volume 2 that they have read elsewhere. Consider it review, and hope you never have to actually “take the test,” although if called on to use a gun in self defense, I doubt anyone will ever feel over-prepared!