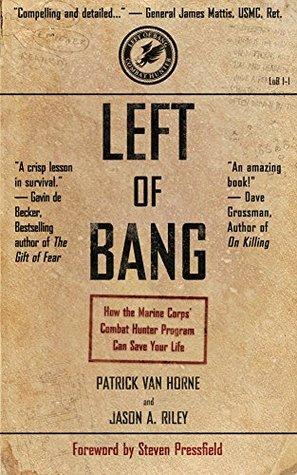 Left of Bang had languished in my reading queue for several months until Guy Rossi, the defensive tactics expert giving this journal’s January 2016 lead interview, cited its value in honing awareness and acting on warning signals to avoid attack. I am glad he recommended it!

Written by two USMC veterans, and based on the Marine Corps’ combat hunter training, this book teaches recognition-primed decision-making, by which “people with expertise intuitively identify a pattern in a situation and quickly determine a course of responses, without any analysis or comparing different courses of action.” Intuition is fed by experience, however, and unless one grew up “in tough, do-or-die neighborhoods,” how can we filter the incredible volume of sensory input to know what equals danger?

The authors note that while perfect solutions may not be produced, the outcome is often good enough and under extremely tight time constraints and rapidly changing circumstances, “good enough” is better than tragic. Although most decision-making training is “nearly exclusively” taught as analysis, weighing pros and cons, comparing risks and gains, “You will never have all the time or information you need to make the perfect decision,” they note later.

Enter combat profiling, as taught to deploying Marines. Amongst the foundational principles of situational awareness, baselines and anomalies, critical thinking and decision making, is the “ability to determine what indicators are important and directly related to your safety,” so you can act on what is vital. A thin slice of information can provide enough warning to avoid danger, with only a few seconds of time available, if you know what to look for and know what decisions to make, the authors explain.

A system of identifying what is out of place, “establishing a baseline and determining anomalies,” drives the process. Under the Marines’ Combat Hunter training, three identified anomalies forces a decision, so the danger cannot be ignored or denied out of fear or uncertainty about what to do. Military and police have different mandates, but for the private citizen, the required decision entails options of creating distance (running), hiding and fighting.

A great deal of discussion is dedicated to determining a baseline of normalcy for the current situation, and recognizing anomalies quickly. Because we do not have the luxury of profiling based on gender, race or nationality (consider, after all, Timothy McVeigh and any other number of domestic terrorists), the thin slice of information that determines the anomaly must focus on behavior. Left of Bang cites considerable research into body language, but focuses on the more universal body reactions. “Irises widen due to certain stimuli, adrenaline flows, muscles tense or relax; we smile, we cringe, we bare our fangs,” the authors write, and go on to discuss universal actions that “telegraph intentions to do harm.”

The observer is taught to study human behavior through six domains that span conscious and subconscious body language, biological autonomic responses, interpersonal spatial interaction, environmentally influenced behaviors, and more. The authors assert that for the most part, humans are not good at deception, and the truth is easiest to detect when the suspect is distracted or multi-tasking, for example. Without sure knowledge of a person’s intentions, the combat profiler looks for “clusters” of behaviors, the authors write. “The more indicators leading to the same conclusion, the more accurate combat profilers will be in predicting a person’s emotions and actions. To confirm a cluster, one needs to observe at least three indicators,” they explain.

The indicators might include body language, especially unease demonstrated in the lower body, gestures that disagree with verbalization, physical changes, like a significant change in eye pupil size or other biometric cues to the emotion felt—and the authors provide a detailed discussion of many responses that are outside our control. Distances maintained, as well as moving toward or moving away from people and the space they occupy communicate relationships, attitudes and intentions, the authors explain.

Although the USMC focus is operating in a hostile region, Left of Bang attempts to apply the combat hunter principles to every walk of life, with the emphasis on establishing baselines, recognizing anomalies and making fast, effective decisions. “Any effective method of decision-making should have a threshold of decision,” they teach. “This is the point at which, no matter what, you must make a decision. A threshold of decision guards against hesitation and indecision due to over analysis or waiting for additional information. The combat profiling threshold is called the Combat Rule of Three: When you observe three anomalies or indicators, you must make a decision. Do not wait for more information.”

At times the instruction seems to repeat principles taught earlier, as the authors move from factors used to establish baselines and recognize anomalies into a discussion of applications of the combat hunter principles to daily life. Still, I liked the final section on Applications the best of the entire book, with the summaries like identifying a three-step approach to “quicken your ability to understand your surroundings, speed up your ability to identify anomalies, and ultimately increase your decision-making abilities…with a few simple questions: First, what is going on here? Second, what would cause someone to stand out and why? Third, what would I do about it?”

Although Left of Bang’s instruction is drawn from military operations, the range of responses and actions are broadly applicable to civilian life. “Action may simply be contacting the person to ask some questions and observing them up close,” they write, adding that, “a civilian in the same location might consider report, alert (i.e. sound an alarm), or run.” In other words, while we can learn much from the book’s instruction on being alert and observant, the applications taught can easily be converted to our daily lives in middle class America. As the authors emphasize, “Regardless of what situation you find yourself in, or what role you are playing at the moment, you must have a set of pre-established decisions to make based on what you observe. Otherwise, you’ll freeze, take too long, or make a decision that is not in your best interest.”

Realistically, confident decision making benefits all aspects of our lives, and Left of Bang contributes much to learning and practicing good decisions made more quickly, and avoiding what some have called the paralysis of analysis. For armed citizens and anyone who takes steps to avoid criminal victimization, this preparation takes on an entirely different level of importance. As Left of Bang concludes, the authors comment, “Those who prepare and train themselves for the possibility of violence will react differently than those who do not. Those who are not prepared will likely panic and will ultimately become helpless (Condition Black). Those who are prepared will still experience anxiety but will be more likely to maintain awareness and act effectively in a stressful situation (possibly going as far as Condition Red). Rather than a ‘survival mindset,’ we recommend that you have a ‘combat hunter mindset.’”

They go on to highlight situational awareness—going about our daily activities in Condition Yellow, identifying pre-event indicators, being aware of behavioral indicators and making a decision to do something about what you have observed. During a valuable discussion about workplace violence, the authors comment, “Quite often, many people see one or more pre-event indicators leading up to an insider attack but fail to do anything about it. They brush it off, rationalize it, don’t report it, or don’t make a note of it and ultimately forget about it.” The combat hunter lifestyle requires a decision, an action when three or more indicators are observed.

The book closes with advice on building observational and decision-making skills, practice routines, and teaching that daily practice is required for the skills to be ready for use in a genuinely dangerous situation. Know your limitations and work hard to improve, the authors advise, adding that combat hunter skills do not rely on intelligence as much as experience, and “we can systematically set about gaining the experience necessary.” A lot of additional resources are referenced at Patrick Van Horne’s website http://www.cp-journal.com. I will be using those resources including his very informative blog at http://www.cp-journal.com/blog/.

Click here to return to February 2016 Journal to read more.