A few months ago, I searched the Internet for a transcript of a speech from which I wanted to quote. I found it on the Foundation for Economic Education’s website. Distracted from the work I was supposed to be doing, I spent a few minutes reading the FEE.org website and found a review that inspired me to order the book Real Heroes, by economist and historian Larry Reed. Through much of October and into November, I was inspired by the short biographies of 40 men and women who, from ancient history to modern times, led freedom’s fight, rose above terrible disadvantages, demonstrated courage, and risked everything to live according to their beliefs. 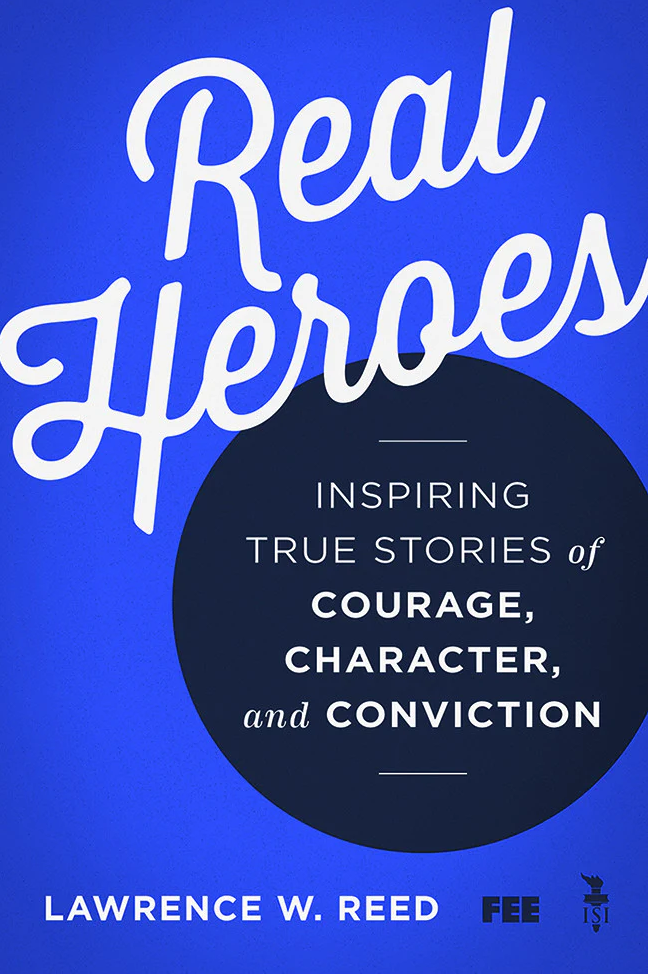 Introducing his topic, Reed explains that heroism springs not from “a single, momentary act but rather from a lifetime of choices.” He believes that character and moral courage are essential to societies that revere freedom. “You can’t sacrifice liberty for short-term convenience,” he observes.

Reed starts his biographical sketches by introducing the reader to Cicero who was born into a Rome “rife with corruption and power lust,” as it was devolving into a welfare state. He spent his life fighting for the Republic and gave his life for speaking out against the rule of Mark Antony. Cicero’s speeches and writings came down through two millennia to inspire America’s founding fathers’ understanding of republican government. Cato and Augustine are also profiled, the first an illustration of leading from the front, the latter noteworthy for having turned his life around from one of hedonistic indulgence to a life of rectitude, love of learning and humility.

I found Reed’s chapter on Adam Smith particularly intriguing. The famous Scottish “Father of Economics” defined economic theory in revealing ways. For example, the economy of his time (1723-1790) viewed precious metals and jewels as wealth, but Smith understood that except for their industrial uses, metals and gems were only mediums of exchange. “Wealth to the world’s first economist was plainly this: goods and services,” Reed points out. The market needed to be free and self-regulating, both in Smith’s time and today. “The experience of the past 240 years has borne out the case Smith made so persuasively: that the ‘invisible hand’ of free prices, competitive markets, and self-interest (properly understood) yields far more economic good for society than the ‘iron fist’ of rulers and their bureaucracies,” Reed writes.

That economists draw Reed’s admiration should come as no surprise; the author is also an economist. In a later chapter he profiles Ludwig Erhard, architect of Germany’s recovery after World War II who opined, “It is much easier to give everyone a bigger piece from an ever-growing cake than to gain more from a struggle over the division of a small cake, because in such a process every advantage for one is a disadvantage for another.” While observers called Germany’s turnaround a “miracle,” Erhard disagreed, explaining that it was, “the result of the honest efforts of a whole people who, in keeping with the principles of liberty, were given the opportunity of using personal initiative and human energy.”

Reed also lauds industrialist Vivien Kellems, a lifelong crusader against excessive taxation who railed against turning employers into tax collectors through income tax withholding. This outspoken industrialist ran for political office a number of times between 1952-1958, and while the elections didn’t go in her favor, the campaigns were a great forum for her diatribes against the progressives’ tax schemes. During one campaign, a Connecticut newspaper editorialized, “She understands the circumstances which gave birth to this country, the firm realization of the founders that the power to tax is the power to destroy, and the steps which they took to prevent this power from being misused.”

There is much to admire amongst the abolitionists and anti-slavery activists whom Reed holds up as heroes. Thomas Clarkson, educator Prudence Crandall, and, of course, Harriet Tubman. 27 years of slavery left Tubman scarred and she never fully recovered from a traumatic brain injury inflicted when she refused to help capture a runaway slave. After she escaped to Philadelphia, Tubman returned to the slave states 13 times to bring out at least 70 slaves.

Courageous, self-sacrificing, self-reliant, and driven describe the female and black entrepreneurs Reed profiles. Each had a host of reasons they should not have succeeded, yet each undeniably made concrete improvements. Booker T. Washington is quoted as having said, “Character, not circumstances, makes the man.” None of the entrepreneurs profiled expected someone else to give them a hand up. “I got my start by giving myself a start,” quipped the woman who created an empire of haircare products for black women.

The same is true for Joe Louis, Althea Gibson, Jesse Owens, and other champion athletes who were denied the right to compete in major events because of race. Reed admires them for putting in the grueling work to rise to the top of sports that discriminated against them merely for “the pigmentation of their skin,” to borrow the words of women’s tennis great Alice Marble, who condemned the tennis community for not allowing Althea Gibson to play at the US National Championship.

Marie Curie’s father was a teacher and scientist who was persecuted by the Russians during the occupation of Poland. While her groundbreaking work on radioactivity took place in France, I hadn’t previously read that Marie Curie’s “undergraduate education took place at an illegal private institution” in Poland, because Russian occupation censored books, education and institutions of learning in her native country. Her life and considerable accomplishments teach perseverance and self-sacrifice. Although desperately needing radioactive material for research, neither Marie Curie nor her husband Pierre asked the government “for official credits [or subsidies],” but that did not inhibit Marie Curie’s generosity. “When World War I broke out, the two-time Nobel Prize winner developed mobile x-ray units to bring this vital medical equipment right to the front” saving many lives, Reed reports. Active in ground-breaking scientific discovery at a time when women weren’t considered capable of intellectual achievements, Curie advised believing in oneself, writing once that “we must believe that we are gifted for something.”

Another Pole whom Reed admires is Witold Pilecki, who infiltrated Auschwitz to report the horrors conducted there, escaped, then led the Warsaw uprising, later returning to Poland to “gather evidence of growing Soviet atrocities. His activities led the pro-Soviet Polish puppet regime to mark him as an enemy of the state. In May 1947, two years to the day after Nazi Germany capitulated, Witold Pilecki’s cover was blown. He was arrested and tortured for months before a sham public trial in May 1948, where he was found guilty of espionage and given a death sentence.”

The heroes Reed admires fought some of the ills that are destroying our nation today. A staunch little-L libertarian, he compares the War on Drugs to Prohibition, blaming both for stimulating artificially high profits and jailing non-violent offenders. He points out that Prohibition ended with heavy taxation on alcohol and having done nothing but create crime.

Reed observes, “My personal favorites among Prohibition’s foes were the many jurors who simply refused to convict defendants accused of buying, selling, or drinking illegal booze. They were exercising what legal scholars term the right of ‘jury nullification.’ When jurors acquit an accused person, they know is guilty of breaking the law because they object to the law itself, at least in that individual case they are ‘nullifying’ it. Though controversial among members of the legal community, the practice commands considerable precedent in common law dating back as far as the thirteenth century. In their highly regarded and frequently referenced 1966 book, The American Jury, Harry Kalven Jr. and Hans Zeisel wrote, ‘The Prohibition era provided the most intense example of jury revolt in recent history.’ They reported that the acquittal rate for liquor violations for 8,078 trials in the federal system from 1929 to 1930 was 26 percent.”

Many of the people Reed admires opposed government regulation, be that Prohibition, meddling in education and child-rearing, or regulating trade and business. One result of excessive regulation was an increase in violent crime during Prohibition. He quotes former President Rutherford B. Hayes rejection of the violent tactics of the 1883 temperance movement. The former president wrote, “Personally I do not resort to force—not even the force of law—to advance moral reforms. I prefer education, argument, persuasion, and above all the influence of example—of fashion. Until these resources are exhausted, I would not think of force.”

The threat of packing the Supreme Court is nothing new, Reed reminds readers, telling of Franklin D. Roosevelt’s ill-fated attempt to seat a Supreme Court that would let him run rampant with his New Deal policies. “George Sutherland, Willis Van Devanter, James Clark McReynolds, and Pierce Butler—four justices who endured ridicule from the highest places and from men far less principled—defended the Constitution as their oaths required.” Neglected in the history of jurisprudence because they stood in the way of federal government expansion, the author names them, “four of the most principled and courageous people ever appointed to the Supreme Court.”

When the State of Oregon tried to outlaw private schools and ordered children to attend state schools, the four justices struck down the State’s power grab. They voted to overturn the National Industrial Recovery Act’s price fixing scheme and tossed out the Agricultural Adjustment Act that taxed agriculture then used the tax revenues to pay “for the destruction of healthy crops and cattle so as to raise prices.” They didn’t win all their fights, Reed reports. The hero justices fought the Gold Clause but did not prevail, with the result that citizens were denied ownership of gold for nearly 40 years.

Real Heroes profiles obscure freedom fighters as enthusiastically as it holds up prominent figures from history. With another election behind us and feeling the weariness of speaking out for changes that now appear to be consigned again to the back burner, Reed’s little biographical sketches inspire readers to keep opposing power grabs and incursions against freedom. I appreciated the encouragement!