“How can we motivate more people with carry permits, or guns for home defense, to attend training beyond the state minimum?” ask Karl Rehn and John Daub in their book Strategies and Standards for Defensive Handgun Training. It is a good question and one not only of concern to instructors but, as they wisely note, to armed citizens, as well. Untrained gun owners make deadly mistakes that result in public outrage and domino into knee-jerk legislative restrictions that apply against even the most well-trained, responsible among us. 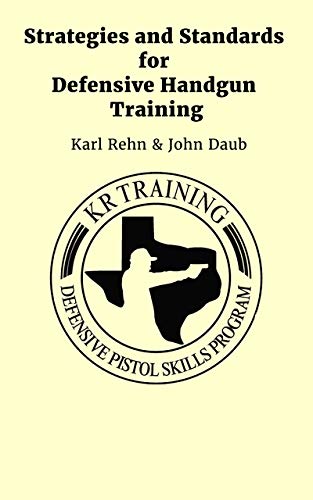 “If you are an armed citizen, these questions matter to you. If you aren’t motivated to do more than the state minimum, this book will explain the gap between that minimum and our preferred standards, and the reasons behind those standards. If you are motivated to practice, this book can provide some guidance to a progression of skills and performance standards you can use as a simple training program,” authors Daub and Rehn explain.

Strategies and Standards starts with a little history of KR Training, an enterprise started a few years before the state of TX passed its concealed carry license legislation. Rehn notes that when he started his school in 1991, he was the only instructor in Austin, TX teaching to armed citizens. The 1995 passage of a license to carry law in TX mandated training and Rehn and his instructors began to see a chasm grow between those completing coursework only to meet the requirement and those who avidly pursue mastery of firearms skills. Because Rehn comes from an academic background with a strong statistical bent, and Daub is a software developer, they approached this puzzle by analyzing reports to learn how many people own guns, how many participate regularly in training, competition or simply going to the range for target shooting.

Research about why people go target shooting is compared against Maslow’s hierarchy of human needs. With little in the way of scientific study about the motivations driving shooters who achieve high levels of skill, Rehn analyzes studies about video gamers’ motivations and concluded that “achievement, social interaction, and immersion” drove them; he extrapolates that “the gun school/competition subculture” is driven by the same motivations.

“Perception of the need for skills affects motivation to train and selection of courses to attend,” the authors explain. “The biggest thing I learned from my personal experiences and from my research was a greater awareness of the divide between the noble motives claimed by most who attend training and their actual motivation,” Daub later writes. Honest evaluation of risks to life and safety and the solutions to dangers ranging from car wrecks to bombs lead to the authors’ frank observation: “Interestingly, defensive gun use is not high on the list of anti-crime skills.”

The authors report that beginners should, but fail to, ask, “What minimum level of competence do I need to have reasonable odds of surviving a deadly force incident? What do I need to know to be ready for the legal and psychological aftermath?” In addition, though many enjoy plinking, drills designed to gauge skills are rarely performed. The authors comment, “People do not include measurement of skill using standards in practice... shooting standards are like taking tests, and nobody likes taking tests, particularly tests for which one feels unprepared or on which one expects to do poorly.”

They had 118 shooters perform a simple 1.5 second, one shot competency test using a variety of sighting methods. The shooters had little difficulty with the 1.5 second time limit, but the authors suggest that reducing the time to 1.25 or less would result in significantly higher incidences of unsafe gun handling and poor marksmanship, both of which are corrected through continuing an advanced level training. They add, “The real value of training, though, is that it improves competence, which leads to a higher level of confidence...Training and the resultant confidence can reduce many of the negative outcomes that can occur: failure to engage; gun accidents; legal consequences of poor defensive decisions; or injury or death due to lack of speed or ineffective hits.”

A chapter on instructor standards serves instructors and those who would like to be firearms instructors as well as students. Anyone who is teaching or would like to teach will find Rehn and Daub’s observations an important self-evaluation tool. Those seeking instructors should note important attributes that are too often eclipsed by glitzy websites, flashy YouTube videos and social media popularity. “Social media and marketing skills help build training programs but do not guarantee competent instructors,” they astutely observe.

How should students and those who carry guns for self defense set standards of skill? The authors start by critiquing standards they’ve run across, weighed against data that attempts to define the average defensive gun use. There are two extremes: such high standards that few reach that level of accomplishment or such low standards that sub-par performers falsely believe themselves qualified. They suggest a modified version of the TX License to Carry test as preferable.

Rehn and Daub discuss self-guided practice, advising, “Untimed, unstructured target practice is not the same as practicing the drills run in the training, particularly if the practice does not include evaluation of current skill level via any kind of scored drill compared to a standard or goal score.” Skill development and maintenance is thoroughly discussed, with the high-level performer’s automaticity explained as well as its role in skill retention. “Don’t assume because you reached a particular level once, for a short period, that the skill is available at that level if you don’t maintain it.”

The book closes with a number of practice drills, comparing the shooter’s skill level against scores by IPSC grand master level shooters. The authors discussed achieving varying levels of proficiency and acknowledge that while most shooters will not become Grand Masters, everyone needs a scale against which to measure. Skill improvement is stunted when only compared against one’s previous accomplishments.

Strategies and Standards for Defensive Handgun Training opens with the problem of how few gun owners and concealed carry licensees pursue skill development beyond that required to pass their state’s concealed carry licensing requirements. Throughout the 154 pages, that idea grows from moving beyond state-mandated minimums to an inspiring call to pursue skill growth that is fostered by regular practice using the drills outlined and measured against top level shooters.