As most of you know, the State of Washington Office of Insurance Commissioner (OIC) investigated the NRA Carry Guard Insurance program, and eventually found that the NRA was selling insurance without a certificate of authority to sell insurance in WA State. Ultimately, the NRA along with Lockton Risk (the agency selling the actual insurance policies) closed down selling its program in WA State. Recently, we learned that the Carry Guard program has been discontinued nationwide https://www.thetrace.org/rounds/the-nra-ends-its-carry-guard-insurance-program/ .

Now, I am not ready to immediately believe what The Trace writes, given it is a Michael Bloomberg news outlet, but from what I have heard from other sources it is likely to be true. I followed the link to the NRA Carry Guard website https://www.nracarryguard.com and there was no mention of insurance. They are still promoting their training program, but they have no classes listed. If it is viable, it is on life support. RIP Carry Guard.

The Network has been notified by the Washington OIC that it has opened an investigation into the Network, alleging that we are also selling self-defense insurance. We have, from day one, stressed to members that Network assistance to members who have had to defend themselves is not provided through insurance. The OIC began asking us questions a couple months ago, and we have been diligently working towards a defense against their claim. After hiring a law firm, and hashing out the issues, going back and forth with them, we now believe that we will likely prevail against the OIC’s claim. Since it is too early to know with 100% certainty, we will not divulge our legal strategy or particulars of the investigation. 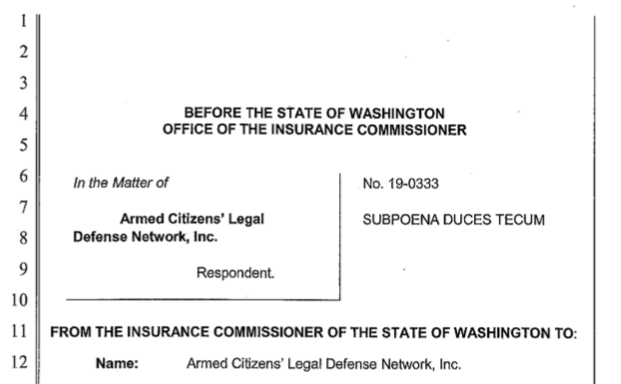 Having said that, here is the process as far as I know it. First, at this time, the Network is only being investigated and is under no requirement to stop enrolling new members or renewing members from Washington. After completing their investigation, the OIC will decide if the Network membership benefits constitute “insurance.” If they claim we are selling insurance, then the Network has the right to a hearing to contest this finding. I am sure we would pursue the legal recourse of getting a judicial decision on the OIC’s claim. If the hearing, which would be conducted in front of an administrative law judge, went against us, we would have the right to appeal to a Superior Court in WA State. That process would include full discovery on both sides which should prove interesting.

When this started, I had the law firm representing us submit a Freedom of Information Act request and through the documents that were provided, I learned that in addition to investigating the Network and, as we knew, taking action against the NRA Carry Guard, the Washington State Office of Insurance Commissioner is also investigating other companies, including United States Concealed Carry Association and their captive insurance provider, Shield Indemnity, Firearms Legal Protection and US Law Shield/Texas Law Shield.

In a perfect world, the investigation by the OIC will be done fairly and objectively, with the perfect world result that they come to understand that the Network does not sell insurance and thus lose interest in us. But this is not necessarily a perfect world, and so we are taking steps to protect our legal rights.