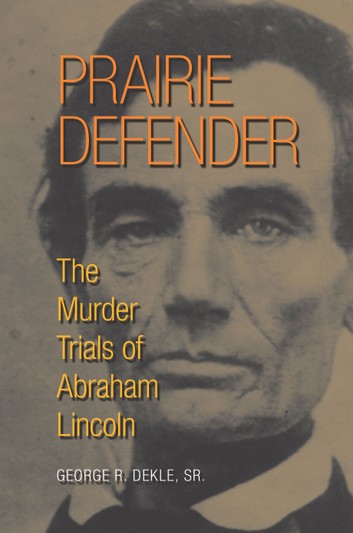 This month’s book review isn’t specifically focused on self defense, but rather takes a look back at trial law from earlier times, through the lens of Abraham Lincoln’s law practice. Stories and outright myths about Lincoln are common and opinions run the gamut of reverential to disparaging. Prairie Defender’s author, a retired assistant state attorney who investigated and prosecuted hundreds of homicide cases during his 30-year career, proposes to dispel both excessive praise and the undue criticism by analyzing a half dozen of Lincoln’s most famous cases, many of which had self-defense elements.

I was intrigued by the stories in Prairie Defender about the criminal justice system in the frontier era. Lawyers and judges worked a circuit, delaying justice for months because there was no court regularly in session in the small settlements. When the judge and lawyers came through, a flurry of legal work ensued. I was interested to learn that Lincoln was sometimes called into service to prosecute, although he more often defended clients charged with crimes. In one story, Lincoln, drafted as prosecutor pro tem, counteracted a community’s inclination to lynch a child rapist. The trial ended with a sentence of 18 years hard labor and one year in solitary confinement. Other cases are mentioned throughout the book in which Lincoln filled in when help was needed prosecuting crimes, as well.

In such sparsely populated communities seating an unbiased jury was all but impossible. A repeating theme in Prairie Defender is requests to change venue in hopes of getting a fair trial. This creates complications, however, because the stories often relate that key witnesses were not available once trials were underway.

Another interesting theme is how often Lincoln participated in petitions for pardons in cases after he lost. Dekle explains, “Throughout his career, Lincoln continued to advocate for his clients even after they were convicted at trial. His forum of choice for that advocacy was not, however, the Supreme Court of Illinois. He seems to have preferred to take his pleas to a forum where he did not have to make legal arguments—the Governor’s Mansion,” Dekle writes.

In these pleas for clemency, Lincoln joined other leading citizens and sometimes even the judges who handed down the sentence, in asking the governor to intervene. Lincoln once sought the pardon of a notorious horse thief before completion of his sentence with the stipulation that the thief leave Illinois. Dekle suggests Lincoln did this because vigilantes planned to kill the thief when he completed his 18-month sentence. This illustrates Lincoln’s philosophy of “persuad[ing] your neighbors to compromise whenever you can,” Dekle observes. In another case, Lincoln petitioned for clemency, then asked the prosecutor to enter a nolle prosequi so the defendant would not be tried yet again.

Dekle tells another story in which a man is prosecuted twice for the same crime, with the prosecution arguing substantially different facts. Edward B. Tinney was accused of killing John Kelsey with a single shot June 22, 1840 in one incident, but it was also alleged that he killed the same man June 22, 1844 and in a different county. He was indicted for murder on both. In one indictment the pistol shot was said to have penetrated four inches into the deceased’s skull. In the other, the shot was supposed to have grazed his head, contributing to his drowning when he fell into a river. Lincoln moved for dismissal on both counts, but the judge dismissed only one and Tinney was tried for manslaughter. A jury found in favor of Lincoln’s client.

These are not just stories of skill and success. In many, Lincoln is one of several attorneys on a team and often he does not control the trial strategy. Dekle tells of a time Lincoln was on a team defending a storekeeper against manslaughter charges. The merchant had thrown a scale weight and killed the town drunk who was threatening him with a shovel. The storekeeper was convicted when Lincoln’s arguments failed to comport with those made by the rest of the defense team.

The reasons behind killings in the 1800s are quite parallel to today’s interpersonal troubles. In one story, a young man named Crafton repeatedly threatened a small, frail man named Harrison. His threats became well-known around the community as a lengthy feud developed, culminating in a multi-person brawl in which Harrison stabbed Crafton to death and slashed his persecutor’s brother, who had joined in the attack.

Lincoln believed Harrison acted in self defense and was astonished when he was indicted for murder. He went to work preparing for trial. “The defense...had four objectives: to establish from eyewitness testimony that Crafton was the aggressor and Harrison tried to avoid the fight, to establish by ‘earwitnesses’ that they had heard Crafton make numerous threats to seriously injure Harrison, to establish that Harrison was physically incapable of fighting Crafton hand-to-hand, and to prove that Crafton made a dying declaration accepting responsibility for his own death,” Dekle relates.

Lincoln had some difficulty convincing the court to allow testimony about the threats. He faced the same problem with admissibility of the dying declaration, in which the deceased accepted responsibility for what had happened. Lincoln eventually prevailed in both challenges and won an acquittal.

Newspapers told of Lincoln’s closing “speech of two hours, examining the evidence with great skill and clearness, discussing the law and replying to the positions assumed by the counsel for the prosecution with a subtle and resistless logic, and frequent illustrations of singular fitness. It was delivered in an earnest, natural and energetic manner.” He presented an “inescapable conclusion that Harrison had acted in self defense and should be acquitted. This is the sort of ‘merciless logic’ that Lincoln was renowned for as a practicing lawyer.” Dekle comments.

Detractors suggest that Lincoln disliked defending clients accused of crimes and critics impugned his skill at criminal defense, which Dekle refutes, citing multiple murder trials and their outcomes. “The depth and breadth of Lincoln’s criminal trial experience cannot be gauged by merely counting cases, nor can the significance of his criminal practice be gauged by a mere case count. Lincoln tried homicide cases at the rate of approximately one per year for his entire career, not a shabby number for a general practitioner in a sparsely populated jurisdiction,” he writes.

Critics suggest Lincoln was incompetent because of the number of murder cases he lost and one source said that of seven murder cases Lincoln tried, he lost ten. Dekle retorts, “One problem with counting ‘trials’ is that there are many different ways to count them. A more revealing way to count Lincoln’s trials would be not to count a proceeding as a trial unless a jury returns a verdict. How many murders did Lincoln defend by this count? He litigated, but did not try, eighteen murder cases,” Dekle writes, adding later that “his colleagues sought [Lincoln] out to assist them in criminal trials.” He closes Prairie Defender with a ringing contradiction of the common myth that before entering politics, Lincoln had a lackluster law career in which he really only shone as an orator. History proves differently, he asserts.

As a reader, I was more entranced by the history and the comparisons to legal problems faced today than Dekle’s defense of Lincoln. If you’re like me, you’ll enjoy the very lengthy bibliography from which to learn about further reading, much of it online including a blog site of which I was previously unaware, http://almanac-trial.blogspot.com and http://www.lawpracticeofabrahamlincoln.org that gave much of the basis for Dekle’s defense of Lincoln.