The Second Amendment and the American Gun: Evolution and Development of a Right Under Siege 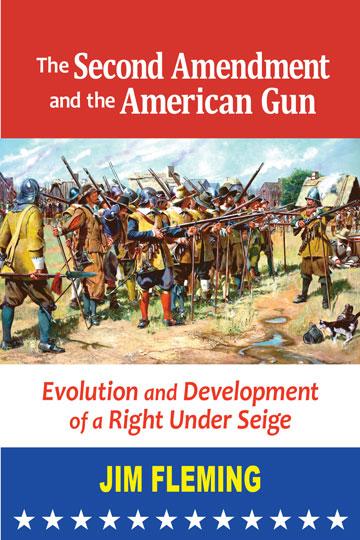 Several months ago, Network Advisory Board member James Fleming commented on Facebook that he had turned over his latest book, The Second Amendment and the American Gun: Evolution and Development of a Right Under Siege, for final editing. When I expressed how eager I was to read it, Jim and his wife Lynne graciously sent a pre-release copy that I enjoyed reading over the Independence Day holiday. I think our members will enjoy Jim’s new book, too, so let me share some of what I learned to whet your appetite for more.

We have been fighting to protect the Second Amendment for so long that the stalemate seems permanent. Fleming’s introduction, however, asserts the impasse could break at any time, so freedom lovers need to fight effectively to defend the Constitution.

Protecting the Constitution requires a clear understanding of it, something that has not always been easy for America’s citizens. Fleming explains, “The purpose of this book is to assist the non-legally trained citizen in understanding the Second Amendment: how it originated, what it was intended by the Founders of our nation to mean, and where we might go from here in terms of that right surviving the onslaught of attacks now being made against it in the courts, in the legislatures, and in the media.”

First, we must understand how our government developed. Fleming explains briefly why the Articles of Confederation, ratified a mere six years before the 1787 Constitutional Convention, proved insufficient. The independent States, lacking a common currency, couldn’t fund troops or pay off foreign debts. Shay’s Rebellion illustrates some of the problems, he cites.

Still, many feared a centralized government, and with good reason. Fleming asserts that both the Federalists and their opponents “believed that the principal threat to the future of the new republic was a tyrannical government.” An armed citizenry, “capable of confronting and defeating a standing army,” was the key remedy put forward. They hoped citizen soldiers could serve and then return to their “communities and occupations with their arms when the danger passed,” he observes.

History taught our founders’ English ancestors the value of weapons against tyrants. Fleming outlines the battles for power that wracked England, quoting Blackstone and others to show that the right to possess weaponry for self preservation is cited in the same context as other fundamental human rights. He quotes St. George Tucker, a prominent Virginian, who wrote, “The right of self defense is the first law of nature,” adding that when government disarms citizens, “liberty, if not already annihilated, is on the brink of destruction.”

Tucker, Fleming continues, identified four individual liberties: owning and carrying weapons, “freedom of religion, freedom of speech, and freedom to assemble.” To Tucker’s assertion that the right to bear arms “offers a strong moral check against usurpation and arbitrary power of rulers,” Fleming adds the words of other early American leaders who recognized the rights of an armed citizenry to stop government power grabs.

In that context, the militia was the focus of many of the founder’s arguments. Should states control their local militias or should a powerful central government direct them? Tracing government dictates from the 1800s to 1900s to today, Fleming weighs whether, in light of the Second Amendment’s preface about “a well regulated militia,” the Founders intended the right to own weapons only for militiamen. Before sharing his conclusion, however, he teaches how scholars interpret the Constitution. Should we seek the original intent of the Founder’s words, rely on court rulings in earlier cases, weigh the costs against the benefits of one decision over another, or apply other standards?

For a time, the Constitution was held to restrict only Federal intrusions, Fleming continues, outlining United States v. Cruikshank (1876) and Presser v. Illinois (1886), in which the Supreme Court indicated that the Second Amendment shouldn’t interfere in a state’s legislation. He later explains the evolution of the 14th Amendment’s application to gun rights cases. Federal circuit court decisions in 2001 and 2002 (Emerson and Silveira) were 180 degrees apart on whether the Second Amendment affirmed an individual right, establishing a reason to argue a right to keep and bear arms case before the Supreme Court. Then Parker v. District of Columbia begat the Heller case, he outlines, and this handgun ban challenge spun off into two important Supreme Court cases, of which armed citizens are rightly proud.

The three-judge district appellate court ruling upholding armed guard Dick Heller’s right to have a handgun in his home acknowledged that the right to bear arms predated the government our Constitution defines, Fleming quotes. The Second Amendment identifies “the People” as the object of the right, just as is done in the first, fourth, ninth and tenth amendments, he points out. Those rights apply to individuals; so do the Second Amendment rights, he emphasizes. The Heller chapter sketches out the arguments made by the plaintiff and respondent, then Fleming details the 5-4 decision.

The majority in Heller separated the Second Amendment’s preface about militias from the operative clause identifying the people’s right to keep and bear arms, Fleming states. He summarizes individual rights, reasonable restrictions, how laws are evaluated to determine Constitutionality, and the interplay between the majority opinion and dissents. He closes the chapter by reminding the reader, “The Heller court did not address the question of how the ruling might be applied to challenge state gun laws and regulations.”

After Heller, lower courts began to rule that a state can’t regulate gun possession in the homes of law-abiding citizens, Fleming writes, citing decisions from OH, NY, NJ, IL. He explains that state and Federal Circuit courts continue to define Second Amendment limits. He further predicts that the Court will “not accede to calls for the Second Amendment to be ‘modernized’ at the expense of its original meaning.”

Fleming educates readers on how the protections in the Bill of Rights are incorporated into the Constitution through the 14th Amendment, which assures that, “No state shall make or enforce any law which shall abridge the privileges and immunities of citizens of the United States; nor shall any state deprive any person of life, liberty, or property, without due process of law; nor deny to any person within its jurisdiction the equal protection of the laws.” Through this amendment, American citizens are assured that the Bill of Rights must also be honored by the various states. He adds that this protection was really first applied in 1925 in a First Amendment decision. Known as “constitutional incorporation,” this incorporation was not applied to Second Amendment rights until 2010 when Otis McDonald challenged Chicago’s handgun registration scheme, first in district court, then in the Seventh Circuit Court of Appeals and finally before the Supreme Court.

In McDonald’s 5-4 decision, the Court again acknowledged that state and local laws cannot trample Second Amendment rights, Fleming writes. Supreme Court Justice Thomas declared that, “The Second Amendment is fully applicable to the states because the right to keep and bear arms is guaranteed by the Fourteenth Amendment as a privilege of American citizenship,” he quotes. Justice Alito wrote, “It cannot be doubted that the right to bear arms was regarded as a substantive guarantee, not a prohibition that could be ignored so long as the States legislated in an even-handed manner.” The McDonald decision, Fleming explains, while not overturning Chicago gun registration laws, returned it to the lower court to correct its ruling.

Fleming writes briefly of the flurry of court challenges raised since. Too many activists predicted unrealistic effects from the Heller and McDonald decisions, he wrote prophetically in advance of the blow the Ninth Circuit dealt in Peruta. He further warns about the number of issues the Supreme Court left undecided in Heller and McDonald. “There is simply no way for the court to address all the possible questions that might arise in a single case, or even a half-dozen for that matter. That is, after all the function of the lower courts, and the Supreme Court has obviously taken the position that it is now time for them to do that work,” he explains.

Concealed carry is the next battlefront. Fleming explains how in Moore v. Madigan the Seventh Circuit court struck down IL law prohibiting carry of a gun outside the home. The Circuit Courts remain divided, and he tallies the success in IL, minus the losses in NJ and MD, suggesting there is cause for optimism by pointing out, “A factor that should not be overlooked is that the majority of the states recognize an individual right to bear arms under their own state constitutions.”

Fleming’s final pages discuss ongoing attacks on Second Amendment rights by figures ranging from the President, law commentators, legal analysts, political lobbyists and persons of influence, including retired Supreme Court Justice John Paul Stevens. Other claims assert that the Second Amendment’s protections don’t extend to modern firearms, that it only protects arms suitable for military/militia functions, that restrictions can be based on the destructive potential of the gun in question, and whether the Constitution can even apply to modern societal conditions.

Preserving the Constitution requires educated citizens. Fleming closes his book with this thought: “My hope is that you can take from this book information necessary for you to develop your own understanding and appreciation of our right to keep and bear arms.” The founders were deeply distrustful of the armies a tyrannical government could throw against rebellious subjects, he adds. They penned the Constitution and the Bill of Rights with the understanding that citizens needed to own guns so they could defend their communities, not only to serve in an organized militia. “Americans need to not only understand the background and history of the Second Amendment, but the constant need to protect that Second Amendment. Once it is gone, the rest of the Bill of Rights will quickly follow, for there will be no one left to protect it,” he concludes.

Click here to return to August 2016 Journal to read more.