Self-Defense Against A Dog Attack

My Internet search history must be catching up with me! Dog training and self defense–searched separately–are so frequently in my search parameters that I suppose it is no surprise that a recent Internet search unexpectedly turned up a book about surviving dog attacks. Naturally, I clicked the link which led me to a 2012 book by an author I hadn’t read for a while.

Over the years, I’ve appreciated retired law enforcement officer and martial arts author Loren Christensen’s ability to brief self-defense practitioners on topics of concern. In 2008, one of our earlier book reviews was his volume on workplace violence, he has a great little volume on school shootings and several times, we’ve recommended Deadly Force Encounters, a book Christensen and Alexis Artwohl co-wrote. 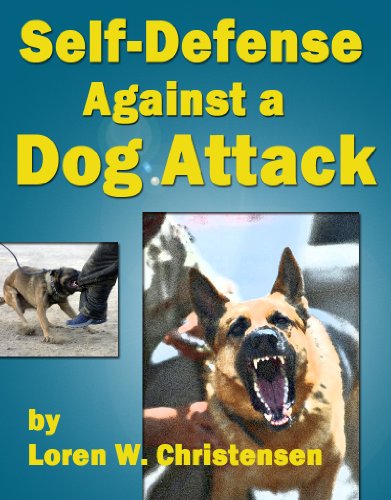 Dog bites deserve serious preventive measures, and before members ask, “Why not just shoot it?” allow me to observe that we also have to be concerned about missing and causing unintended harm to something other than the dog. We have to worry about ricochets off pavement, shooting in a crowded environment and whether or not we can hit a rapidly moving canine attacker that’s all tangled up with a family pet, a child or one of our own limbs. We need options in addition to the gun.

Christensen, best known for his martial arts books, has the chops to write this book. He was a dog handler in the Army and has retired after a career in law enforcement. He challenges our preconceived notions about dogs and calls out pet owners’ mistaken belief that their pet is domesticated and thus harmless, commenting, “Too many people fail to realize that their pet still has a primeval side, one based on eons of fighting for survival when cave people lived in, well, caves …This primeval side—unpredictable, savage—always shocks people, though it shouldn’t.” This is a common blind spot, he continues, warning readers against upbraiding others about their dog’s behavior. “It’s indeed common for an aggressive dog to reflect its owner’s personality. This is important to keep in mind should you want to confront an owner, say, in a park, to complain about his dog running about unleashed.” Leaving the vicinity is safer and if worried that others may be endangered, call the authorities, he advises.

Relating vignettes from his experience to illustrate his point, Christensen stresses that no matter how much we love our dogs, they don’t lose the “ancient dog ways” and even the nicest pet can get stuck in that primitive instinct under the wrong circumstances. While we may have greater fear of a lone, wandering dog, he observes that over three-quarters of dog bites occur on the owner’s property or when the owner is present. Nonetheless, a later section discusses wild dogs, signs of rabies infection in dogs, and the good news about modern rabies treatment if you are bitten.

The wounds range from multiple bites delivered in rapid sequence (like an old-fashioned typewriter), to flesh literally torn away, to broken bones and dislocations, he explains. He describes dog postures and behaviors that can suggest the level of threat and readiness to bite, including the canine version of the 1000-yard stare, a fixed gaze off to the side. Is offering a food treat a good strategy? Maybe not! He explains that food aggression can make “offering food to a threatening dog…risky.”

Christensen discusses derailing a charging dog attack with command voice, a “deep, commanding” NO! and teaches how to mask your fear through stance, body positioning and vocal tenor. When worried about danger from a nearby dog, blade your posture and take a power stance with knees slightly bent and keep your hands closed, he advises, because fingers have been amputated by dog bites. Don’t run or flail your limbs which dogs can perceive as threatening, he continues, and concludes, “If the dog doesn’t react to your ‘stay,’ ‘no,’ and ‘down,’ know that you’re facing a potentially dangerous animal, one that is definitely unpredictable.”

Defensive stances you can assume for stability that the dog won’t interpret as challenging are illustrated. If the attack materializes and you have no intervening objects or other escapes, you may survive by employing kicks to specific targets (he acknowledges the very real possibility of bites to the foot or leg), covering up your own vitals, and moving away without being taken to the ground by the dog, all tactics which he illustrates in this book.

Hitting an attacking dog is a dodgy business. Christensen writes, “If the dog has your right arm, hit its throat with your left, or slam your knee into its chest and belly.” He introduces defensive blows to the dog’s body with the reality check that there are no guaranteed techniques or targets that will “work every time.” On some breeds, a nose smash or hammer fist to the skull may have some affect but carry the risk that the dog “can snap his head up and grab your fist.” Nose, eye and ear gouges, kicks and knee strikes to the dog’s chest, and other physical defense against a dog are described and illustrated, along with the author’s recommendation to pre-plan safe escapes. “Think about what you’re going to do now when you’re calm and collected as opposed to trying to think when your heart is hammering in your throat,” he urges.

Canine physiology makes favorite martial arts “stuns” and choke holds mostly ineffective on dogs, although Christensen shows the dog-handler’s technique of pinching off the trachea below the larynx, but warns against the idea of straddling the dog to control it. Even a foot stomp to the dog’s foot, done correctly with power, can create surprise, he illustrates. The book contains a good number of pictures including one showing the bite victim flipping a large German Shepherd that has ahold of the man’s forearm. Not able to accomplish that? Children and others can be taught to assume a fetal position, protecting the head and vitals as best as possible, then lie completely still until the dog loses interest in fighting, he adds.

Christensen estimates that if charged by a dog you have about three seconds to protect yourself. Grab something to jam in his face, he suggests, trying to keep the bite off your body, and gives the reality check that being bitten on the arm is preferable to dog bite damage to your face, throat or stomach. “Feed him your arm. If you’re fortunate enough to have a few seconds, grab a blanket off the sofa, a bath towel off the rack, or the coat off your back, and wrap your left forearm if you’re right-handed, your right forearm if you’re left-handed, and feed it to the dog. Will you feel the pressure or the sharpness of its teeth through these things? Probably. I often felt the pressure through the attack sleeve that was specifically designed to train hard biting dogs,” he relates.

Christensen offers a good chapter on pepper spray against dogs with the comment that in his experience it seemed more effective against dogs than against violent people he faced as a law enforcement officer. Situational concerns are also discussed, including–

Self-Defense Against A Dog Attack is included in Christensen’s two-part Fighter’s Fact Book: Street Fighting Essentials series at http://www.lorenchristensen.com/books.html but the dog attack material is also available as a stand-alone eBook at Amazon which is what led me to it and how I read it.

I have had dogs for most of my life and while I’m careful and guarded around unknown dogs, I am not unusually fearful of them. Christensen’s book held my attention, taught me several new responses, and warned of a number of concerns. Our Network President Marty Hayes opines that it is his belief that the only time he would resort to gunfire against a vicious dog would be if the dog had latched on to him already. That leaves a lot of situations that need to be solved without gunfire. Christensen outlines many options that I hadn’t thought of before. I’m glad his book popped up unexpectedly in my search results.