Deadly Force Encounters
Cops and Citizens Defending Themselves and Others

Ten years ago, this journal reviewed the original version of Alexis Artwohl’s and Loren W. Christensen’s classic on the physio-psychological effects of violent encounters, Deadly Force Encounters: What Cops Need to Know to Mentally and Physically Prepare for and Survive a Gunfight.

It was not a new book then, with a 1997 copyright by Paladin Press. I was very pleased when these acclaimed authors published an updated version, offering in the preface, “extensive updated research on extreme stress events and…specific recommendations to officers, agencies, and citizens on how to survive deadly force encounters and cope with the aftermath.” 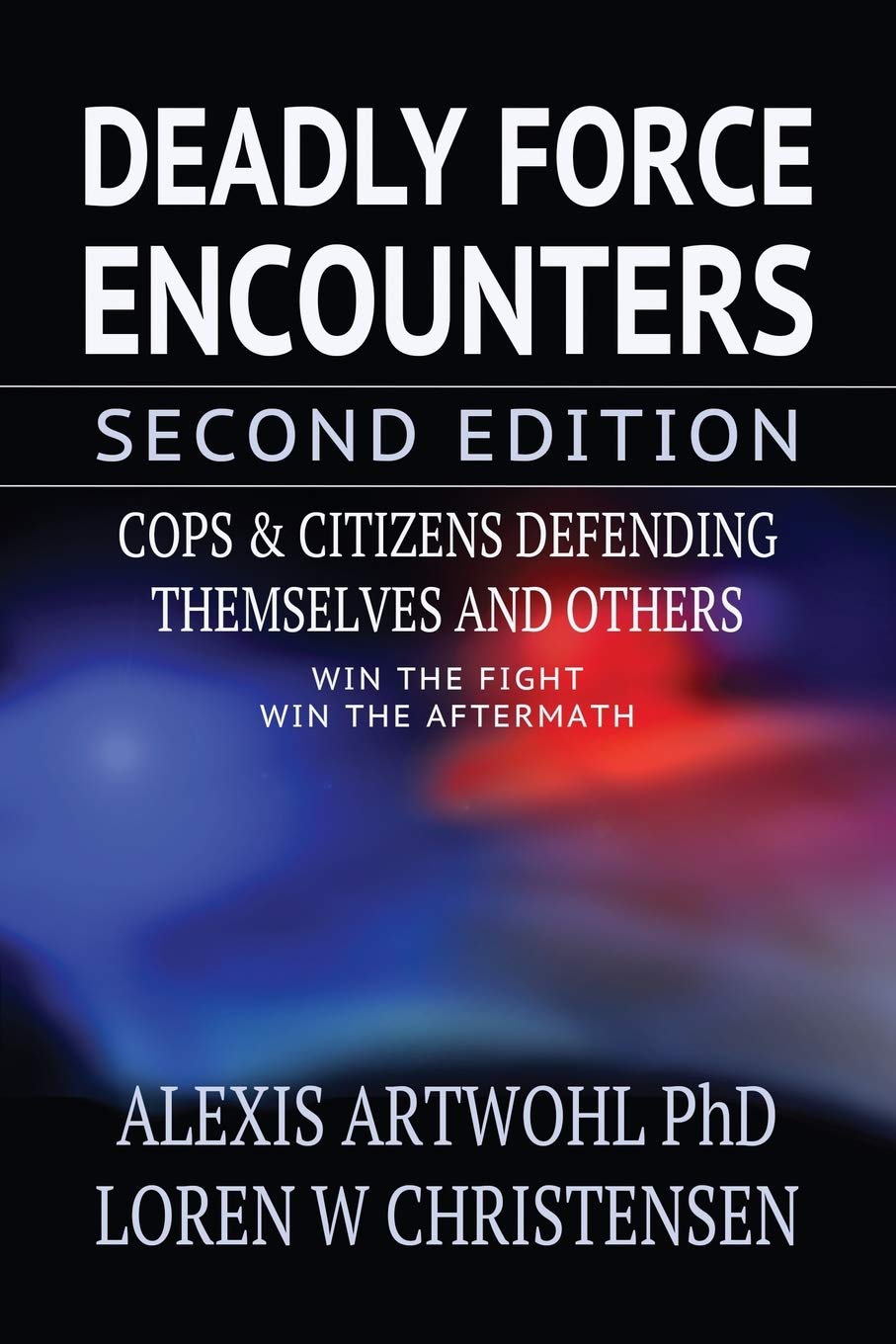 Although both authors worked in law enforcement, this is not exclusively a police book. In dedicating the second edition to police officers, community members and first responders, they note, “Although our focus is on officer-involved use of force, much of the research and principles apply to many other situations as well,” adding later, “Evil prowls the streets 24/7, and smart citizens need to take responsibility for their own safety. Everyone can cultivate a survival mindset; some people go on to develop a warrior mindset with skills. Many citizens rescue, defend, and protect themselves, their loved ones, total strangers, and police officers.”

The book draws on a wide array of scholarly research, combined with experiences from the authors’ careers as a police psychologist and a police officer, to teach about how use of deadly force affects people. Do not be put off by the police-oriented anecdotes. Police use of force incidents are documented in excruciating detail while self defense by citizens is often no-billed with little publicity generated, so the facts are not publicized or recorded for posterity. Many of the aftermath issues, while not identical, are definitely parallel.

One such aspect, raised by the authors early in Deadly Force Encounters, is legal survival. In law enforcement, a criminal investigation and internal affairs investigation is all but guaranteed after use of deadly force and civil lawsuit is very likely. As is true for the armed citizen, political motives increase the likelihood of punishment. “Citizens forced to defend themselves from an attack can also find themselves in serious legal trouble for committing an assault or homicide no matter how justified the use of force. Assaults are crimes, and the police investigate them as such,” they explain. A common thought, they continue, is, “‘I haven’t done anything wrong, so why do I need a lawyer?’ Whether spoken by cops or citizens, this is a naive assumption for anyone being investigated...the entirety of the criminal justice system is too complex to be fully understood by laypeople and is subject to human error just like all other institutions,” they observe later in the book.

One difficulty is striking the balance between silence and giving a statement. “People involved in use-of-force incidents are likely to experience high levels of emotional turmoil and feel a strong need to talk about what happened,” however survivors must keep in mind that, “everything they say and do at the scene, including 911 and other phone calls, is observed, probably recorded by multiple individuals, and could be used against them in all the ensuing legal actions, including civil litigation that might happen months or years down the road,” they write.

They add, “If citizens decide to make a public safety statement, it can include brief information such as who is the victim and the offender, location of physical evidence, injuries, identifying witnesses, and other information relevant to immediate public safety and securing the scene...Citizens should provide this brief information in a calm and restrained manner. They should not ramble, second-guess, speculate, editorialize, dump emotional reactions in public, or answer any questions in detail except under the supervision of their attorney.”

Most will afford themselves of the opportunity to make a full statement under the supervision of their attorney. The authors explain, “The full statement is where the involved officers or citizens sit down with detectives and undergo extensive questioning about all the details of the event. Often recorded, interviews and all statements and behaviors of the interviewee become part of the public record. Everything can be used against them in criminal and civil litigation.” That’s why, they add later, “it is best to wait for one or two sleep cycles” before submitting to an interview. A substantial amount of memory research follows, too much to detail here, but it is recommended reading and just one more good reason to buy Deadly Force Encounters for detailed study and a permanent place in your resource library.

Artwohl and Christensen contrast the competing priorities of individuals, society, and the criminal justice system. As humans, we care primarily about survival, but after that’s assured, our brains need to make sense of what happened and extract details that might be useful in the future. Conversely, the criminal justice system cares only for “exactly what happened.” That creates what the authors call a “disconnect,” because “people who experience or witness an event are highly unlikely to have perfect performance or perfect recall. Much of the time, this is not of great importance. However, for people who become tangled up in the criminal justice system, a less than perfect memory or performance might, and has, resulted in them being falsely accused of lying, covering up, and obstructing. In the worst cases it can lead to indictment and conviction.”

Ignorance about brain function combines with “the demands of the criminal justice system” to cause survivors of critical incidents considerable harm, they warn. Combat that general ignorance by studying this book and take to heart the authors’ advice about surviving a critical incident. First, one must survive the criminal violence, and from experience and research the authors outline attributes they deem “important for people to develop if they want to protect themselves from predatory attacks.” These include calmness, survival mindset, respect and the warrior mindset. Each element is explained in depth and is too long to fully review here. Additional pages address the effects and management of fear, the importance of personal resiliency and maintaining a positive outlook–before trouble strikes.

Also notable is the chapter discussing why eyewitness testimony is so unreliable and how false memories are implanted, all backed up with research from multiple sources. The authors comment, “Given the fallibility of memory, these ‘always believe the accuser without any evidence’ movements are dangerous deviations from the fundamentals of the criminal justice system: thorough investigations, due process, the presumption of innocence, the right to face one’s accuser, and trial by facts and evidence rather than emotion and bias.”

Relevant training is essential and needs to consider “a combination of individual abilities, health status, and a wide variety of other issues unique to each person. For example, those interested in home defense can access information on how to harden their security. Concealed carry requires a whole different area of training. People who use a cane can learn to use it as a self-defense weapon,” the authors explain.

Stress inoculation, they continue, is “an essential element of reality-based training.” Done right, stress inoculation “should start with classroom education on the physiology and psychology of stress reactions, and techniques to manage the symptoms.” Simulated defense situations are part of any successful training program and the authors quote a study showing “Use-of-force simulators provide an important training mechanism in which important skills can be honed, and they are important in transferring trained judgment and firearms skills from the classroom and the firing range to actual field encounters.” Don’t forget to role play the aftermath, too, they advise.

A long segment on visualization outlines harnessing the power of the mind to provide frequent training. “Research shows that frequent practice for small periods, known as ‘distributed practice,’ can be a more effective method of learning and skill maintenance as opposed to ‘massed’ or ‘block’ practice where the students only train for long sessions now and then,” the authors write. Safe dryfire and mental rehearsals of defensive scenarios are recommended. “Mental rehearsal of effective responses has long been known to enhance learning and performance. This can range from imaging the smooth, uniform feel of a trigger pull, to rehearsing entire complex scenarios.” Christensen relates how he would mentally rehearse law enforcement responses, “After just a few sessions, I found myself responding to…hold-up calls more smoothly and confidently...All because I had practiced, albeit only in my mind. This is a powerful technique that many cops, military, and top athletes use to enhance performance.”

There’s a parallel mental function in the way people revisit and critique past actions. The authors explain, “After a dramatic event, many people find themselves involuntarily replaying it over and over in their minds, sometimes for a week or longer. This can include dreams and second-guessing what happened…The temporary natural tendency to repeatedly relive what happened can be harnessed as a learning experience for any event, including seeking more information or training to improve future responses,” but when the replays continue for extended time periods, it is detrimental and one of the recognized symptoms of post-traumatic stress disorder (PTSD).

People who have faced imminent death report common responses–experienced in varying degrees of intensity–ranging from mentally reliving the incident, trouble concentrating, increased startle reflex, avoidance, anger, blaming or guilt, feeling helpless, second guessing their decisions, and more, the authors report. These are not uniform, the authors stress, owing to the great variations in human resiliency, supportive or hostile environments, individual degrees of preparation to face hardship and more. “Social support is essential to all humans, especially after a PTE [potentially traumatic event]. Group debriefings and peer support teams can be a critical part of mobilizing collegial support.” They stress facts about PTSD that debunk common myths and identify Eye Movement Desensitization and Reprocessing (EMDR) therapy as a helpful tool in recovery.

A chapter on developing resiliency urges readers to adopt a positive outlook when things are going well, noting, “Resiliency is a way of life, not a single epiphany or method.” Instead of taking a class or seminar that generally addresses resiliency, they recommend getting training or counseling on specific problem areas and addressing real issues like health and endurance, sleep deprivation and proactively solving looming issues. “A defining characteristic of adults and children who cope well is their ability to quickly size up a challenge, grab as much control of a situation as possible, and proactively work to enhance their survival,” they advise.

Resilient people, they continue, find meaningful ways to be of service to others and know how to accept help when they need it themselves. Find meaning and purpose, they continue, and practice being adaptive and flexible as a means of coping. Other characteristics include strong ego boundaries, not taking perceived slights as personal attacks or abuse, and practicing gratitude.