Up Close with John Farnam

The absence of true high-speed internet in my area makes me forget the extent to which videos have replaced books and that’s reflected in this column. That changed this month when I saw on Panteao Productions’ website, a video biography of our own Advisory Board member, John Farnam.

Myself a devotee of Farnam’s instruction, I pledged to keep my cool despite the latency in the streaming (a constant curse at my end of the broadband cable and absolutely no fault of Panteao’s) and enjoy listening to Farnam talk about his life’s work. I enjoyed it so much that I’d like to recommend it through this review.

Introducing himself to video viewers, John Farnam explains that as a young man, he earned his third purple heart on his 51st day in Viet Nam a Marine 2nd Lieutenant. The war shaped “how I looked at things for the rest of my life,” he states. 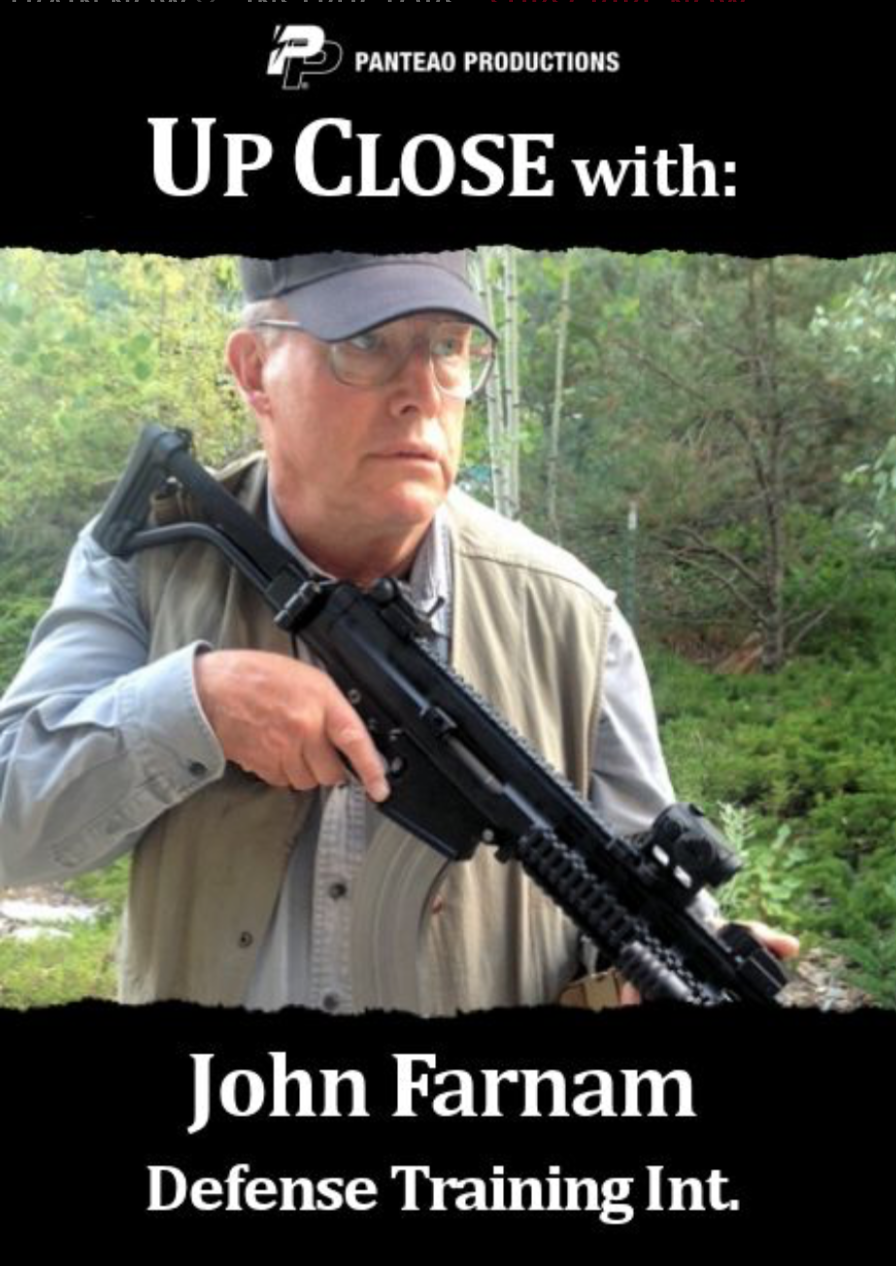 When he left active duty in 1970, he wrote a paper called “Living with Guns” in which he explained that at Quantico, Marines like him were taught how to operate guns, but not how to “live with them.” The predictable numbers of accidental shootings, injuries and deaths, created in the young Farnam both a lingering bitterness but also a drive to change the deficiency. He has for the balance of his life, lectured and taught courses on the “art and science of defensive shooting.”

Now in his early 70s, Farnam remains driven to share those lessons with “the next generation of American shooters.” Gunshot wound statistics show that about 75 percent are accidental, self-inflicted; a goodly number beyond that are suicides. Only one to two percent of gunshot wounds, he asserts, result from one person purposely shooting another person. Farnam observes, “Statistically, the most important thing you can learn is how to handle guns correctly, because the one person in your life that represents the greatest threat to you, more than all the criminals in the world combined, is you!” Modern firearms are “about as safe as it is possible to make a gun and still have it useful for any practical purposes,” he opines.

By far, the most dangerous stage of gun handling is holstering, Farnam continues. The serious gun owner who carries a gun every day, has to handle that gun at least twice a day, “not for the purpose of shooting someone, but for the purpose of getting it into a particular condition or putting it in a particular place,” he accounts. The best place for your gun is carried on body where it is under your control, and when not, make sure it is “adequately secured.”

Farnam defines the conflict between serious gun ownership and alcohol or legal drug use, explaining that “these are issues most of our students are unacquainted with, they are things about which they never even thought. Well, it is time to think about it,” he urges. Although he doesn’t tell people what to do, Farnam educates about how “the system will react,” to a lethal force event. He comments on the permanent after-effects of shooting someone and of being shot, explaining that one doesn’t “get over it; it is a matter of putting it in perspective.” Do not allow that single event to define you, he urges.

Farnam warns that excessively expensive equipment is no substitute for skill development. “In my experience, the amount of money people lavish on their guns is inversely proportionate to their skills,” he asserts. People want skill without effort, he comments, noting that attending his classes is hard work. Know why you are attending training, he advises. Students who go to classes “on a lark,” as recreational fun, are in for disappointment in a Farnam class, he comments. His courses discuss being caught up in the criminal justice system, interacting with police, role play to learn how to disengage and avoid an escalating approach from a criminal through learned “tape loops.”

“Most lethal shootings are avoidable,” he comments a bit later. “How? Don’t go to stupid places, don’t associate with stupid people, don’t do stupid things. Be in bed by 10 o’clock. Have a normal appearance. Most of all, don’t fail the attitude test. With the police, with anybody, don’t fail the attitude test. Just be a pleasant person and you will probably avoid 99 percent of the fights you are ever likely to get involved in.”

When you carry a gun, Farnam stresses, you can’t afford to get in a fight you can avoid. To that end, he teaches avoidance, how to disengage, and recommends not “being there to begin with.” If you have had to draw your gun, “statistically, the odds of you shooting at that point are one in 30,” he states because most assailants will disengage. When they do not, he continues, “nine times out of 10…they don’t see the gun. They don’t understand what is going on,” the posture of holding a gun out “is not particularly distinctive,” he mimes. His classes combine use of the gun with verbal challenges to encourage the assailant to disengage, he explains. “That is a relatively happy ending. Now, have you still committed an aggravated assault? You sure have, and so you need to be the first to the phone to call the police…but no one got hurt, and with any luck your actions will be looked upon as reasonable.”

He comments that armed citizens neither like nor want to have to draw a gun on another person, “but under some circumstances, it is a good thing to do.” If the assailant runs away, that’s a good thing. You might be arrested or sued, but the happy part of the ending is that no one was hurt or killed. In less favorable outcomes, shooting may be required. Then, “we are going to shoot in a way that is most likely to end the fight quickly” to avoid the likelihood of being seriously hurt, Farnam continues.

A homicide investigation follows a pattern, he explains. The responding officer can’t pretend not to hear an injudicious comment made at a crime scene and Farnam urges listeners to work out what needs to be said and rehearse saying that and no more. The aftermath is complicated by previous brushes with the law. If you’ve had a drunk driving conviction or an illegal drug arrest in the past, that “will not be helpful,” he stresses.

Discussing post shooting concerns, Farnam states, “There’s not much good news. You are going to have to hire a lawyer, maybe more than one, you may be charged criminally, there is a very good chance you will be sued for wrongful death or something like that by the estate of the decedent. Expect it; don’t become a victim of it. This is part of what we call the ‘inoculation effect.’ When the student knows ahead of time, it is not so scary when it happens. You’ve been inoculated, ‘OK, they said something like this might happen, I’m OK.’

“The unrealistic expectations are the biggest danger. When students think they are going to get thanked or they are going to be regarded as a hero or something like that. When those things don’t happen, then their world starts to fall apart. Students need to know what to expect; how to handle it; and we need to assure them that whatever it is, you’re ok…you’ll put it into perspective and you are alive to worry about it, which a lot of people are not, so be thankful for that.”

This dose of reality is classic Farnam, and it was good to hear it again, this time on Panteao Productions’ Up Close with John Farnam. If you’ve never had the chance to train with Farnam or have and miss hearing his engaging lecture style, I think you will enjoy this streaming video as much as I did.