In a month, over half of the Network crew will head to Indianapolis to meet with old friends and new at the NRA Annual Meeting. Our VP Vincent Shuck gave all the exhibit details in earlier pages of this edition so let me concentrate on some of the people with whom we’re hoping to reconnect. One reason we’ll be looking up our friends is to say a big “Thank You!” You see, from the beginning, the Network has been blessed with the support of a lot of the leaders in the industries that supply the guns, ammo and accessories used by armed citizens.

The support of our friends takes multiple forms—

1. Recommending Network membership to friends, clients and those in their sphere of influence;

3. Product donations that we auction to raise money for the Legal Defense Fund; and

4. Distributing our Foundation’s booklet or our membership brochure to increase awareness of legal issues that follow self defense.

We appreciate the generosity of the many friends who have made the Network’s growth a priority in their charitable giving. You can’t beat a broad base of support, each person giving what he or she can to further build up the Legal Defense Fund. Thousands of Network members support us in that fashion and we hope we get the chance to shake many hands and say, “I appreciate what you do for us,” many times over.

Because the NRA Annual Meeting Exhibit hall is filled with gun-centric businesses, this is a great opportunity for us to express our gratitude to a number of business people who support the Network.

For many years the following businesses have gone out of their way to make sure the Network’s Legal Defense Fund remains strong for defense of members.

Black Hills Ammunition is owned by Jeff and Kristi Hoffman. Years before the Network was formed, Jeff and Kristi were in my personal circle, providing ammunition for gun reviews during my days as a writer. Their kind support has continued with the birth and growth of the Network and the maturing of Black Hills Ammunition from a startup remanufactured ammunition company in the early 1980s to a premier source for self defense ammunition, rifle ammunition, cowboy action ammo, and yes, their line of factory remanufactured ammo is as great as it was when I got to know them all those years ago.

Jeff and Kristi donate several cases of their ammo per year for auction to build up the Legal Defense Fund. Their generosity continued even through the Obama years’ ammunition shortages, and last year, in addition to a case of practice ammo, they donated a case of the premium Honey Badger self defense ammunition. 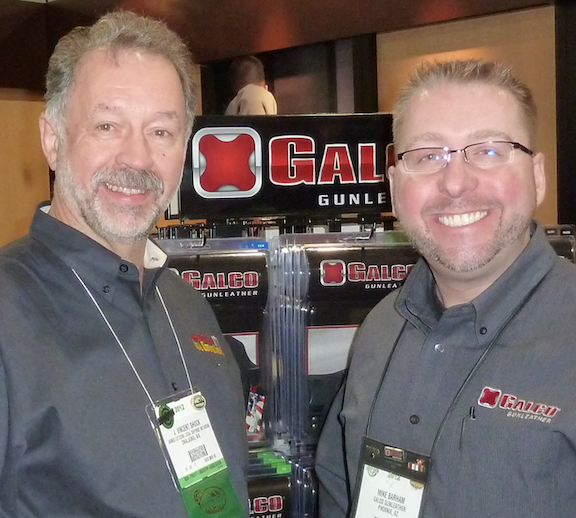 Our first fund-raising auction was an exotic leather shoulder holster with a gorgeous alligator finish donated by Galco Gunleather. Each year since, Galco’s Mike Barham has made sure the Network had another gift certificate for an ostrich, alligator, stingray or sharkskin holster, magazine pouch and matching belt (https://www.galcogunleather.com/exotic-holsters-custom-shop_8_458.html) One Network member in particular watches for those auctions and has prevailed in several of those bidding wars to carry his guns in these special Galco rigs. Suffice it to say, Galco has been a wonderful friend to the Network and we cannot thank them enough for their dedication to the Network’s mission.

Marty and I have known the good folks at Crimson Trace since it was a startup in Portland, OR, because a friend and student joined their team to publicize the value of aiming lasers on pistols to law enforcement and armed citizens.

Through our friend Clyde Caceres, we met Crimson Trace founder Lew Danielson, and although both gentlemen have since retired, Crimson Trace continues to support the Network through donations of LaserGrips for auction so the Network’s Legal Defense Fund remains strong. It is interesting to be three decades into relationships like we have with Black Hills and Crimson Trace, and we are grateful for their belief in the value of the Network.

Our Advisory Board member John Farnam deserves credit for introducing us to a lot of people in the industry, including Steve and Kate Camp of the Ravelin Group’s Safe Direction ballistic containment products. (Check out the video at http://store.ravelingroup.com) Over the years, Steve and Kate have donated a variety of safe backstop items for fund-raising auction including their rifle-caliber-safe backstops and pistol caliber ballistic containment pads in many formats. Once, they even donated a reactive steel target system! That one was interesting to ship.

Their generosity has ranged from donations of my favorite, the Academy Pad, a very portable 7 by10 inch NIJ IIIA Handgun Rated Ballistic Containment System that fits in a three-ring binder and is super portable for travelers, to ballistic containment pads in a variety of range bags, dryfire armor board suitable for either pistol or rifle, and even a pad that can be inserted into a backpack. The goal, of course, is that unloading, loading or dryfire practice literally receives an added layer of safety against accidental discharges. Steve and Kate have generously supported the Network with their donations.

When I first coveted a ROBAR rifle, the company was under the able and enthusiastic guidance of its founder, Robbie Barrkman. Robbie is one of a kind–and stopping to chat with him at industry conventions was always an experience. When we founded the Network, Robbie agreed to include copies of our Foundation’s booklet What Every Gun Owner Needs to Know About Self Defense Law when delivering custom guns to his clients. About five years later, booklet resupply requests began coming from none other than Freddie Blish, who became general manager and later purchased ROBAR when Robbie retired.

The name Freddie Blish was prominent in Pantaeo instructional videos, and other instructional media so I was a little amazed to get emails from him requesting booklets. Nowadays, Freddie contributes several gift certificates redeemable for gun refinishing and when we auction the ROBAR certificates, they are enthusiastically received and as with the Galco donations, one member in particular vies for the win and now several of his pistols are protected by the famous ROBAR NP3 finish.

A number of years ago we exhibited at an NRA Annual Meeting in Charlotte, NC. There we met “The Nates.” Nate Johnson and Nate Beard, under the imprimatur of Nate Squared Tactical (N82 Tactical), were just then introducing comfort-focused neoprene-backed concealed carry holsters, so they were also exhibiting at the event, which just happened to be in their home state. We meet the best people at these meetings – and now you know why we continue to exhibit at them.

Since that day, the Nates have included a copy of the Network’s tri-fold brochure in each shipment. I remember one NRA Annual Meeting when, at the end of the show, I sent a box of brochures we hadn’t used home with them, but most years we ship brochures to them and they keep sending them out with their holsters.

Georgeann and Jay French were also NRA Annual Meeting recruitment successes for the Network. We met the French family at the 2011 convention in Pittsburgh, PA – when we were visiting for the convention, and they were attending in their home state. I stayed in touch with Jay through ups and downs of manufacturing and selling khaki trousers, jeans and shorts with specially-designed holster pockets. It has not always been easy for this entrepreneur (the garment industry is one of the toughest) but the Frenches have persevered and CCW Breakaways came back strong a few years ago and hasn’t looked back. Read about them at https://www.ccwbreakaways.com/about-us/.

The front pockets on their purpose-made trousers have heavy duty snaps hidden beneath the garment’s waistband. A deep, sturdy pocket holds the pistol with stiff fabric to break up its design. Armed citizens who order a pair or two of CCW Breakaways also get a copy of our Foundation’s booklet with their holster trousers and thus they learn about the Network.

Many years ago, a fellow instructor waited until after class had dismissed to show me how he was carrying his backup gun. That was my first look at a Recluse Pocket Holster, a popular deep-carry product that is made just a hundred miles or so from where I live. It is ironic, then, about the only time I see Recluse owner Tod Cole is at the NRA Annual Meetings. Several times a year, we mail Tod cases of our Foundation’s booklet What Every Gun Owner Needs to Know About Self Defense Law and we have a number of members who report learning about the Network when they got their Recluse holster. See the details of Tod’s work at http://www.recluseholster.com.

In addition to these generous businessmen and women, word about the Network’s mission goes out to students of armed self defense from our affiliated instructors and gun shops. We always enjoy hearing how things are going from these good folks, too, and look forward to getting caught up with our affiliates when we all go to Indianapolis for this year’s convention.

I want to close by talking about our newest corporate sponsor. When Ammo.com purchasers specify the Armed Citizens Educational Foundation as their charity of choice, Ammo.com donates 1 percent of their order to our Educational Foundation as described at https://ammo.com/donations. Now, this model is a little different than the direct donations to the Network’s Legal Defense Fund, although the end result remains a stronger Network. You see, the other big supporter of our Educational Foundation is the Network itself, through the purchase of advertising pages in What Every Gun Owner Needs to Know About Self Defense Law that tells each recipient of that booklet how the Armed Citizens’ Legal Defense Network came to be and why being part of the Network is so very crucial to anyone who carries a gun for self defense.

By being able to afford to print thousands upon thousands of copies of that booklet and provide them free of charge to gun businesses that ship to customers, to firearms and self-defense instructors for distribution in their classes and to gun shops to give to their customers, our Foundation is able to create better-educated armed citizens who may avoid some of the problems gun owners with zero education encounter. Through the Network’s advertising pages in that booklet, those readers also become aware of the Network’s mission of supporting members after use of force in self defense. When those booklet readers join the Network, we all benefit by having access to a Legal Defense Fund that is continuously growing in strength.

Over the years, corporate sponsors have come and gone, but these have continued each year to do what they can to keep the Network’s Legal Defense Fund vital and growing to assist Network members after self defense. I’m looking forward to seeing as many of these good men and women as I can during the NRA Annual Meeting and all the rest of our great Network members, as well.