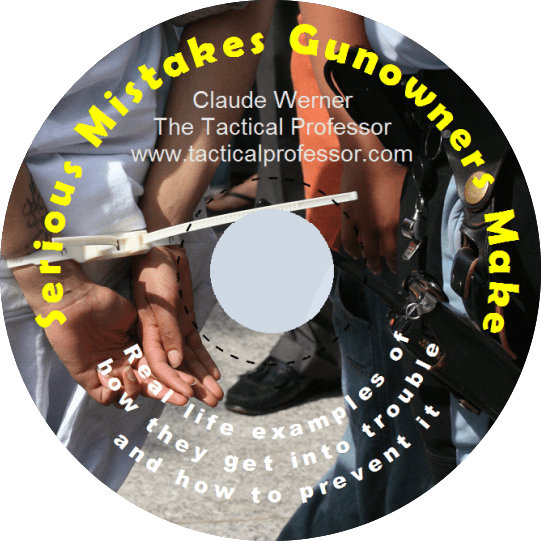 Serious Mistakes Gunowners Make
Real Life Examples of How They Get Into Trouble and How to Prevent It
An audio lecture by Claude Werner
$19.95, 1 hour, 14 minutes
https://www.freewebstore.org/Personal-Safety-Training/Gunowner_Mistakes_Audio/p1933952_15296641.aspx

I regularly study Affiliated Instructor Claude Werner’s blog, so when he releases an audio or video lecture, I snap it right up. This audio presentation grew out of a popular lecture Werner gave at the 2015 Rangemaster Tactical Conference and is the subject of many of his blog posts at http://www.tacticalprofessor.com.

Werner identifies 11 types of mistakes gun owners make all too regularly. This lecture speaks to serious errors like shooting yourself or the wrong person, being shot by police, being needlessly arrested even though your actions were justifiable or leaving guns where children get them, to name only a few. I liked the real-life examples included in each chapter, since it’s so much better to learn from the mistakes of others.

Werner starts with an incident in which a man asked a woman in a parking lot for a light for his cigarette, frightening her badly. She brandished her revolver and was arrested because parking lot surveillance showed the man was not behaving aggressively, nor was he closer than ten feet. Had a real threat been made, self defense might be offered as a legal defense against charges of brandishing and aggravated assault with a firearm, he notes, but adds that being startled is not enough to merit pointing a firearm.

Avoid being startled by keeping your head up and developing the habit of looking around frequently. In addition, practice forcefully saying, “No!” he continues, because he believes the woman in this example should have simply held up her hand and said, “No!” to the approaching man.

Next Werner raises a topic Marc MacYoung has also addressed with us (http://www.armedcitizensnetwork.org/defending-self-defense-knife-use), so I was interested to hear Claude’s viewpoint on what both have identified instinctually chasing an attacker who is withdrawing. Werner tells the story of a 2012 home invasion in which the resident was beaten, but shot his attackers. As they fled, he continued to shoot from inside his apartment and his spray of bullets hit a parked car and a nearby structure.

A western states robbery victim was also punished for his part in a fight that started when two men robbed him, then shot at him as he pursued in his car. Some time later, a resident of a nearby dwelling sought medical care for a grazing gunshot wound to his head, attributed to a stray bullet from the incident. The robbery victim justified his actions, saying he had to contain the threat because the departing assailants might return, an argument a trial court and an appeals court “found unpersuasive,” Werner relates.

Avoid the primitive chase instinct by programming positive responses by focusing on the goal of personal safety, not the problem of the assault, Werner lectures. Concentrate on better responses, he urges. For example, call 9-1-1 as soon as practical instead of giving chase.

Werner next discusses hitting an uninvolved person with shots intended for an attacker. While his primary examples entail shotgun use, he stresses the necessity of knowing your capability with any gun you may use. In densely populated places, you may need to close the distance to guarantee hits, he teaches. Don’t expect to face off with an assailant like two gunfighters on an empty Main Street in a western movie, he quips, adding, “We have to be able to direct our gun fire accurately at the criminal without hitting innocent people who may be downrange.” Additional concerns include over-penetration, and Werner goes on to address sensible ammunition selection and altering firing positions to keep innocents out of the line of fire.

Werner next discusses intervening to stop crimes involving strangers. Unless personally targeted, it is very difficult to know all the facts, he stresses. In court, a woman who fired at escaping shoplifters explained that she had to make a split-second decision. Choosing when and how to intervene should be determined well in advance, Werner counters. Even police discourage off-duty officer intervention in crime when human life is not at risk, he notes.

Lost and stolen guns have caused all too many problems, continues the next chapter. This often starts by removing but then forgetting a gun in a public restroom or leaving a gun left unsecured in a vehicle when entering a no-gun zone. Plan and provide in advance for gun security, he urges, recommending lock boxes in cars, and devising ways to use public restrooms without setting your gun down off-body.

Tragedies from mistaking an innocent person for a home invader or other threat fuel a long recitation of news reports. Common causes include darkness and not being ready with a flashlight, failing to challenge the suspect verbally, and assuming that a noise or unidentified movement is an intruder when, Werner estimates, 97% of the time it is actually someone who shares the home.

Learn to manipulate a flashlight while holding a handgun, and don’t pick up a gun at night without a flashlight, Werner urges. This is harder with long guns, because it is nearly impossible to use a flashlight that is not weapon mounted, but Werner stresses that you cannot search safely with a weapon mounted light because the muzzle points at the person you locate – who may belong in the home just as much as you do.

“Gun handling is just as important as marksmanship, probably more so, ” Werner states, introducing a chapter on negligent discharges. Sometimes property is damaged, other times people harm themselves or others. He cites injuries that occurred when entering or leaving an area where loaded guns are prohibited, as well as holstering mishaps. Scrupulous attention to keeping fingers away from the trigger and trigger guard, safe, high-quality holsters, and muzzle discipline are significant protections against injury, death, or material loss from a negligent discharge.

I wonder how Werner selected the examples for the “Poor Judgment” chapter because there are so many candidates. He cites a police training officer who put his gun to a recruit trainee’s head and pulled the trigger, another death occurred when a child attending church was hit by a falling bullet that had been discharged at a nearby holiday bash, and a woman was arrested for attempted first degree murder after she discharged her handgun inside her home during an argument about her husband not doing his share of the chores.

Meriting its own chapter, failing to secure weapons is one of our biggest problems. Children can and “frequently do” prove capable of pulling stiff, double action triggers and overcoming inadequate security provisions, Werner asserts. These tragedies have occurred in the home, in automobiles, in motels and in stores. Deaths all too often result and if the gun owner survives, he or she can face child abuse charges, felony culpable negligence, manslaughter or endangering a child. Never put a gun in the car’s glove box, center console or door pocket, Werner teaches. A gun in the car needs to be on the owner’s body. If it is uncomfortable, get a different gun or holster, he urges. Purse carry requires the purse kept on the body at all times, he adds.

Unintentional violation of a gun law is a common risk for travelers, Werner next continues, citing the PA mom who told a NJ police officer that she was carrying her gun in accordance with her PA permit, only to learn it is not valid in NJ. Although eventually pardoned, she was held in jail for 40 days. Werner adds that this incident brought hundreds of similar situations to light. You must have a “very clear understanding” of gun possession and self-defense law when you travel, he stresses.

The complex topic of use of deadly force is beyond the scope of this audio lecture, Werner explains in the final chapter. However, the news is full of reports of gun owners jailed after acting foolishly or maliciously. Shooting through doors, luring thieves into an ambush, leaving and returning with a gun to settle an argument are examples. Unjustifiable shootings result in murder and manslaughter convictions that earn long prison sentences, he relates. Know the law of self defense and support reasonable decisions by learning fear control methods, avoiding alcohol when using firearms, and employing alternative defenses like pepper spray for times when deadly force is not justifiable, he urges.

Here the audio lecture ends. Although there is no summary chapter, each chapter stands powerfully on its own. This is a lecture every gun club should integrate into meetings; it would also serve as excellent home work for concealed carry classes, and Network members should listen and recognize risks that have sneaked into our behavior, as well as having examples ready to drive home gun safety lessons when addressing fellow armed citizens who are behave irresponsibly.

Click here to return to April 2016 Journal to read more.