As 2022 spools down to the end, we offer our year-end review of the Network’s work on behalf of its members. During 2022 several members called and discussed situations of concern with Network President Marty Hayes, but none resulted in any danger of charges for the members so the services of an attorney were not needed and no money was withdrawn from the Legal Defense Fund.

Without any legal defense expenses to add to our statistics this year, let me offer a snapshot of our history of service to members spanning 15 years from 2008 through the end of 2022. During that time, we have paid just short of $282,500 to attorneys to represent 29 members who have lawfully used force in self defense. We first paid an attorney in February of 2011 to represent a member after he displayed a pistol but did not shoot when threatened by multiple assailants; the most recent member-involved case came in the fall of 2021 and entailed defensive display of a rifle.

Our members’ experiences run parallel to the findings of prominent researchers: armed citizens can and do resolve violent situations by the display of a firearm. Members have done this 12 times in our 15 years. Called “defensive display,” these situations come up in research more frequently than cases in which armed citizens shoot attackers.

In our 15 years, members have been in four fatality shootings all of which were of such necessity that none of the members had to go to trial and explain to a jury why they used deadly force. Two additional members have discharged firearms and received funding for legal defense. Six member-involved cases entailed either physical defense, improvised weapon use or discharging pepper spray. Twice, members shot to prevent injury from attacking dogs. Three times, members did not draw, but were seen to be armed during a conflicted situation and we paid attorneys to defend their rights.

The Network paid in full for the legal services needed so that each of those 29 members received a complete legal defense. That included paying for lawyers, investigators, expert witnesses and more. We’ve assisted with bail several times, but in all but a couple of situations, the members’ post-incident behavior coupled with the very apparent necessity of their use of force or the relatively minor level of force used all added up to the member sleeping in his own bed that night. Early representation resulted in no charges being filed in all but a few cases. All our members’ cases were resolved without going to trial. 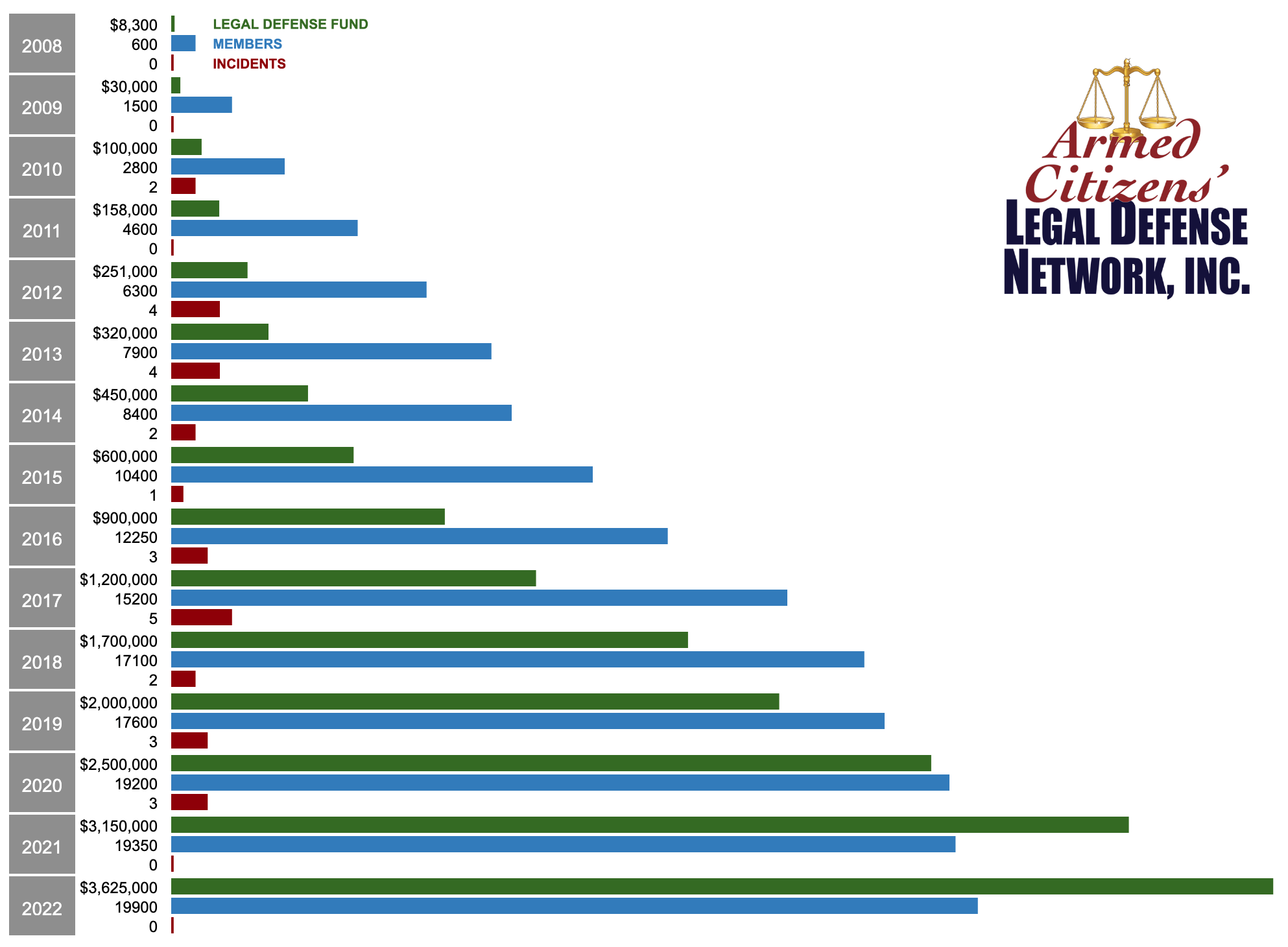 The absence of any trials to report confirms for us that paying an attorney to get involved in defense of the member as soon possible after the incident derails the rush to file charges or quickly brings about dismissal of charges. The lawyer reaches out to the prosecutor or district attorney to make sure the member’s side of what happened is clearly shown. An attorney also shields our member and the member’s family from the news media, sends out private investigators to establish an independent record of witness testimony and scene evidence and takes care of other critical early steps that can vary widely according to the individual situation.

Experts—they’re not just for trial! At the Network, our Advisory Board is composed of the leading experts in use of force for self defense today. When a member’s case has had challenging needs that had to be unraveled, we’ve made sure the member’s attorney had funding to hire the best expert witnesses available to guide their decisions about how to get the best result for the member.

In one situation, our Advisory Board member Massad Ayoob conferred with an attorney who was weighing whether he should arrange for our member, the prosecutor and investigating officers to sit down for a frank Q & A about what had happened. That meeting clarified facts the authorities had not previously understood and led to dismissal of charges.

In another situation, after self defense with pepper spray, our member’s attorney was impressed by an expert witness who videoed himself being sprayed in the face with the same brand of pepper spray the member had used. The video demonstrated effects of and recovery from exposure. In the end, the State folded and a judge dismissed the case, so the video the expert suffered to make didn’t get in front of a jury. His fee was money well-spent, nonetheless. An expert educates attorneys about subjects outside the ken of those who are not use of force experts, highlights case facts need to be investigated further, identifies the strengths of the more deeply and guides legal defense strategy.

Several members have been called before Grand Juries, and were “no billed,” when the jurors decided the evidence presented did not convince them that a crime had been committed and so declined to indict. Attorneys generally aren’t allowed to assist members during their appearance before the Grand Jury, but a lawyer’s help preparing in advance of the hearing is crucial. Should the member be unsure of what to do during the hearing, he may ask to meet with the attorney who waits outside. When members have been called on to tell a Grand Jury what happened to them, we have paid attorneys to assist. The members were not indicted.

The Legal Defense Fund is earmarked exclusively for member defense and is held in accounts separate from Network operating or savings accounts. The Fund is split between certificates of deposit for safe interest earnings and liquid money market accounts for immediate access when a member calls.

As we noted at the beginning of this discussion, 2022 came and went without any member-involved cases needing money from the Legal Defense Fund. As a result, our January 1, 2022 Fund balance of $3,150,000 has grown to $3,625,000. What will 2023 bring? Whether the number of member-involved cases increases or if the quietness of 2022 continues, the Legal Defense Fund will remain strong. We hope our members join us in the satisfaction of seeing the Network fulfilling its mission.

Back to Front Page